Tens of thousands of people have staged protests against Hosni Mubarak, the Egyptian president, in  Alexandria, on what activists have dubbed his “Day of Departure”.

An Al Jazeera producer said the crowds had gathered on Friday at the Qaed Ibrahim mosque in the centre of Egypt’s second city, which sits on the Mediterranean coast.

“Hundreds of thousands of people, possibly a million have gathered here,” he said.

“The atmosphere is very joyous and determined.

“There was an incident of an undercover security officer who tried to start a fight, he was apprehended but not hurt, however, he said he was paid to come and start trouble.”

The protesters, a majority of them from the opposition Muslim Brotherhood movement, shouted “Down with Mubarak! Down with the regime!”

Members of other opposition groups were also present, including activists from the Kefaya (Enough) and 6th April movements and supporters of Egyptian Nobel Peace prize winner and leading dissident Mohamed ElBaradei.

Sobhi Saleh, a spokesman for the Muslim Brotherhood, said another group of about 25,000 protesters had massed in Alexandria’s Raml neighbourhood, and planned to converge with the main gathering before marching to the city’s Sidi Gaber square.

Anti-Mubarak demonstrators who have protested against his regime over the last 11 days had called for massive rallies across Egypt on Friday.

A security official said tens of thousands of demonstrators were on the streets in cities across Egypt, and Cairo’s Tahrir Square, the focal point for the pro-democracy supporters.

There are also reports of thousands of people demonstrating in the northern city of Mahalla.

Mubarak has offered some concessions to protesters seeking to end his 30-year rule, including pledging not to stand for re-election in September.

But he has shown no sign that he will step down immediately. 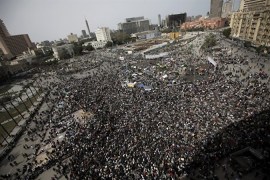 Protesters flood Tahrir Square for ‘Day of Departure’ against the president amid reports of violent standoffs.