“This is a temporary government with a clear mission – to allow a transition to democracy,” he said in a live television address on Thursday.

“Its mission is to organise elections in which the people will be completely free to choose.”

Ghannouchi, also a key figure in the previous administration, said he would stay in his post as the country prepares for parliamentary and presidential elections which are expected to be held in the coming months.

Ghannouchi said the elections will be organised by an independent national commission and overseen by international observers to ensure the vote is “honest and transparent.”

Earlier on Thursday, Kamel Morjane, the foreign minister, resigned saying he was leaving “so that the popular revolution can bear fruit”.

Ghannouchi said the new foreign minister will be Ahmed Ounais, a 75-year-old career diplomat who studied at the Sorbonne University in Paris and served as Tunisia’s ambassador to Moscow and New Delhi.

The new line-up had been agreed after consultations with all political parties and civil society groups, the prime minister said.

Protesters, who earlier on Thursday stormed police barricades in Tunis, the capital, had been calling for a purge of Ben Ali loyalists.

Ben Ali fled to Saudi Arabia on January 14 when weeks of violent protests against poverty, repression and corruption toppled him after 23 years in power.

The interim government which was appointed after Ben Ali’s departure included many officials of RCD, the former ruling party, prompting an angry reaction from demonstrators.

Morjane and the seven other ministers from the RCD quit the party last week but that gesture did not prove enough to appease protesters.

Only three ministers in the government named on Thursday have roots in Ben Ali’s RCD party, compared to 10 in the previous interim cabinet.

Tunisia’s powerful labour union, UGTT, will not join the new government itself but said it would approve of Ghannouchi staying in power, a factor that could help appease protesters. The union has a large membership and has been involved in organising some demonstrations.

In what is being seen as an attempt to ease the tension on the street, the union decided to cancel a big protest rally scheduled for Friday.

However, Al Jazeera’s Hashem Ahelbarra, reporting from Tunis, later said that the union appeared to backtracking from that position and was now unhappy with the announcement.

“I spoke to a spokesperson of the UGTT and he told me … they asked the prime minister to include some faces picked by the UGTT, which he didn’t, and they asked him to form a ‘council of the wise’ that includes practically every independent activist or political figure,” he said.

Ahelbarra said it was, therefore, unclear if the reshuffle would be enough to placate the thousands of demonstrators who continued to throng the main Tunis boulevard, Bourguiba Avenue, demanding that the transitional government resign.

“Some people are saying that this is quite significant and it will send people back to their homes, on the other hand the thousands who have been demonstrating outside the government compound are saying this is not enough,” he said.

“They would like to see the prime minister himself go because he is a reminder of the old regime.”

Speaking on national TV, Ghannouchi said the new cabinet should begin work on political reforms sought by some opposition parties, including new laws on elections, anti-terrorist legislation and press freedom.

In a clear appeal for an end to the daily street protests, Ghannouchi urged Tunisians to “demonstrate civilised behaviour” so that “the revolution can be a success.”

Earlier on Thursday, protesters broke through police lines outside Ghannouchi’s office, where hundreds of demonstrators have pledged to camp out until the government is gone.

Tunisia’s uprising has electrified Arabs across the Middle East and North Africa, where many countries share the complaints of poor living standards and authoritarian rule.

Inspired by Tunisia’s example, thousands of Egyptians have taken to the streets to demand an end to Hosni Mubarak’s 30-year rule, clashing with police who fired tear gas and used water cannon. 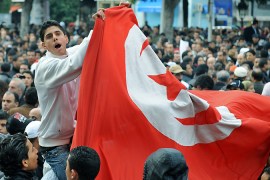 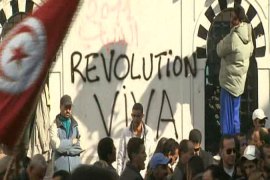 Protesters vow to continue sit-in outside government offices for as long as it takes to topple the ministry. 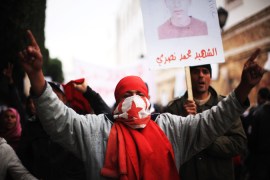 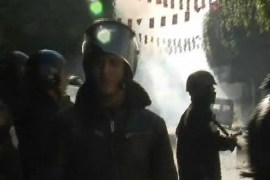 Police clash with demonstrators who want interim-government reshuffle to exclude all members of former government.