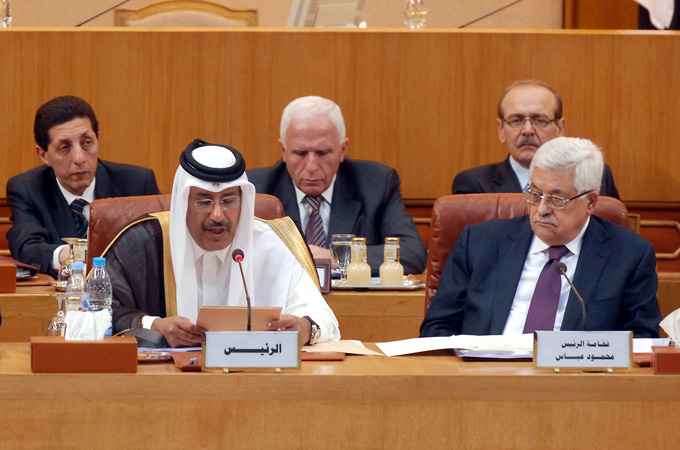 But there is little Arab unity on display in The Palestine Papers: The documents reveal a Palestinian Authority that is often critical and mistrusting of its “Arab brothers”.

Some of the earliest criticism came in July 2007, when chief Palestinian negotiator Saeb Erekat met with US security coordinator Keith Dayton. Erekat wanted to weaken Hamas, and asked Dayton to pressure several Arab regimes to cut support for the group:

Erekat: “Last 6 months we had the least amount of money transferrals from Arab states. Someone has to tell them something. Egypt is allowing the tunnels to continue. What’s this business with the Saudis too? Bandar strikes a deal then Abdullah outmaneuvers him. These regimes depend on you, how can you…”

In an October 20, 2009 meeting with George Mitchell, Erekat accused the Qatari government of carrying out a campaign against him:

Erekat: The Emir of Qatar going on phone personally, calling intellectuals telling them to attack Abbas – calling Azmi Bishara and Abdul-Bari Atwan. This is because Abbas wouldn’t go and do reconciliation in Qatar like the Lebanese. But there is nothing you do with Qatar. Qatar’s prince, your ally, is conducting a personal campaign against Abbas.

The next day, while talking with then-US national security adviser James Jones, Erekat accuses the Saudi government of handing the region over to Hamas:

Erekat: “The Saudis are also crucial… with Iran, Hizbullah, Syria – jumping around the region. They are doing nothing. Abbas is doing Saudi Arabia’s job. Instead they equate him with Hamas. The region is slipping away like sand through our hands.”

Mistrust is another common theme, particularly with regards to the Egyptians. According to a February 3, 2008 e-mail, for example, Erekat worries that the Egyptian government is being duplicitous in regards to its position on Hamas:

“The President has heard re-assuring positions from Egypt regarding controlling Rafah crossing, and the need to abide by the Rafah agreement, as it preserve the political and economic unity b/w the West Bank and Gaza. Dr. Rafiq is not very confident; however, on trusting every single word that the Egyptians are saying, especially when it comes to the relations with Hamas.”

Other documents show similar mistrust of the Egyptians. Erekat asks Mitchell in October 2009 to talk with the Egyptians about a proposed reconciliation deal between Hamas and Fatah, asking Mitchell to ensure that “whatever they put in the paper won’t result in the return of the siege. We don’t want any surprises.”

And there is a bizarre exchange in February 2009, when Erekat meets with Obama adviser Gamal Hilal:

Erekat: “How are your Qatari friends?”

Hilal: “Not my friends. We should replace the US base there with Palestinian forces. Maybe they can take over.”

Erekat: “Who pays for the US base?”

PS: “Qatar paid for much of it. Moving it (to the Emirates) would be very expensive. They also subsidize its operations.”

Hilal: “So we can ship missiles from there to Israel…”