Alassane Ouattara, the internationally recognised president of the Cote d’Ivoire, has called for a month-long ban on cocoa exports, in an attempt to oust Laurent Gbagbo, who remains president despite being widely considered to have lost the disputed November poll.

Anyone contravening the ban will be liable to sanctions, according to a statement issued on Sunday by the government nominated by Ouattara, who is holed up in a hotel guarded by UN troops.

However, given Gbagbo’s control of the main institutions, including the ports and armed forces, it is not clear how the trade will be affected, but cocoa prices may rise.

Meanwhile, Associated Press news agency reported on Monday that Gbagbo has ordered police and military to stop and search all UN vehicles.

Ahoua Don Mello, a spokesman for Gbagbo’s government, said efforts to stem the flow of funds to his boss, who has been in power since 2000, would be futile as trade was no longer dominated by Europe, especially France.

Cocoa is the main source of income for the government of Cote d’Ivoire and any stoppage in exports would cut the funding Gbagbo relies on to pay loyal civil servants and the military.

Meanwhile, Don Mello said businesses were still paying taxes and revenues collected would be deposited in accounts elsewhere. He mentioned Asia, Latin America and emerging African nations as potential partners, but refused to name the countries.

“We have long anticipated all possible decisions… The proof is that the salaries have already been paid,” he added.

Ouattara’s camp estimates that Gbagbo had withdrawn about $200m from the regional central bank while the Gbagbo ally was at the helm despite ministers ordering a freeze.

Ouattara’s call for a ban on cocoa exports comes after the western nations imposed sanctions on individuals and institutions backing Gbagbo, and West African leaders forced a Gbagbo ally out of the regional central bank.

Any reduction in supply is likely to push the price of the commodity used in chocolate towards a 33-year high as Cote d’Ivoire accounts for about 40 per cent of global cocoa exports.

Sporadic violence has claimed the lives of dozens of people. The UN estimates 260 people have been killed in the crisis. Both Gbagbo and Ouattara took the oath as president following the disputed elections.

West African regional body ECOWAS has threatened to oust Gbagbo by force if he does not step down but analysts say any such operation is some time off and squeezing the finances of Gbagbo’s administration is the priority for now. 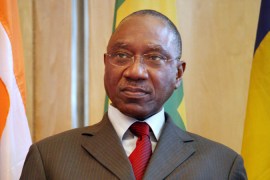 Dacoury-Tabley announced his resignation following a meeting with the heads of state of the West African Economic union. 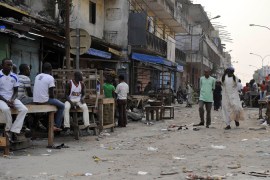 A Nigerian general has said that West African nations are ‘ready’ to use military to dislodge Cote d’Ivoire leader. 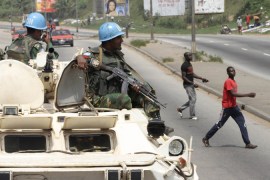 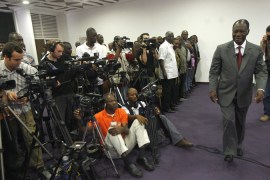