Jean-Claude Duvalier, the former Haitian dictator, has apologised to the victims of his 15-year regime and said he had returned back to Haiti to work for national reconciliation.

In a brief speech at a rented guest house on Friday, Duvalier said he wanted to help with his country’s reconstruction following last year’s deadly quake.

“I am here to show my solidarity at this difficult moment,” he said in his first full public statement since ending two decades in exile and arriving back in Haiti without warning on Sunday.

“Baby Doc” Duvalier – the 59-year-old former leader, who ruled Haiti from 1971 to 1986 through terror after inheriting power from his father – added he also wanted “to express deep sorrow for all those who say they were victims of my government”.

His comments came amid debate and speculation that his sudden return have triggered.

Sebastian Walker, Al Jazeera’s correspondent reporting from Haiti, said Duvalier acknowledged that human rights abuses may have taken place during his rule but left it to his lawyers to answer questions about whether his return could have been motivated by financial gain.

“According to his lawyer, one of the reasons Duvalier decided to come back was to free up funds currently frozen in his Swiss bank accounts” Walker said.

“There is a new law coming into effect in Switzerland in February that could see him losing out on more than $6m.

“His lawyer said it would be used to help Haiti get back on its feet again … exactly what role he intends to play now he’s here remains unclear.”

Speaking in a weak voice to a room packed with journalists, he called for “national reconciliation” in Haiti and said he had hoped for a “rapid resolution to the political crisis.”

But his words are unlikely to calm tensions, with many unanswered questions about his sudden return for people with long memories of his brutal rule.

Many fear he is seeking a return to power by capitalising on the current political chaos stalking the quake-ravaged Caribbean country.

Haiti, already struggling to recover from the devastating January 2010 earthquake, is also caught up in deepening political turmoil due to disputed presidential elections.

Martelly says he believes he will be pushed out of the second round run-off despite the recommendations of international monitors from the Organization of American States.

The OAS said many of the tally sheets it reviewed had been tampered with or altered in favor of President Rene Preval’s chosen candidate, Jude Celestin.

It has recommended that Martelly, not Celestin, should square off against former first lady Mirlande Manigat in the run-off.

The United States, backed by Britain and France, has already warned Haiti’s leaders that they should follow the OAS recommendations to ensure a credible government is in place or risk losing international support.

Stepping up the pressure on Preval, the US State Department said on Friday it had revoked visas for an unspecified number of Haitian government officials.

“Our focus at the present time is in ensuring a free, fair, credible election process in Haiti,” spokesman Philip Crowley said.

“To the extent that there are individuals connected with episodes of violence or corruption, we will not hesitate to take appropriate actions.” 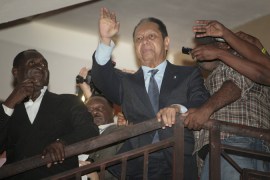 Ex-president Duvalier back in Haiti 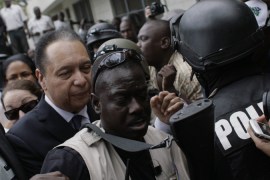 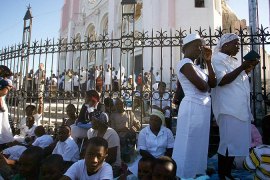