Thousands of Jordanians have taken to the streets of the capital Amman and other cities to protest against rising commodity prices, unemployment and poverty.

The protesters are calling on the government headed by Samir Rifai, the prime minister, to step down.

They called Rifai a “coward” and demanded his resignation.

“Prices, particularly gasoline and food, are getting out of hand,” Buthaina Iftial, a 24-year-old civil servant, said.

“We’re becoming poorer every day,” she said, holding a poster with a piece of Arabic flatbread attached.

Police and plainclothes officers formed rings around the demonstrators to contain the protests. There were no reports of arrests or violence.

“Jordan is not only for the rich. Bread is a red line. Beware of our starvation and fury,” read one of the banners carried after mid-day prayers, amid a heavy police presence, according to the AFP news agency.

“Down with Rifai’s government. Unify yourselves because the government wants to eat your flesh. Raise fuel prices to fill your pocket with millions,” the protesters chanted as they marched in Amman.

Similar demonstrations took place in the cities of Maan, Karak, Salt and Irbid, as well as other parts of the country.

“We are protesting the policies of the goernment, high prices and repeated taxation that made the Jordanian people revolt,” Tawfiq al-Batoush, a former head of Karak municipality, told the Reuters news agency at a protest outside Karak’s Al Omari mosque.

Friday’s protests came amid similar protests in Algeria and Tunisia.

On Tuesday, Jordan’s government announced a $169m plan to reduce the prices of commodities, including fuel, sugar and rice, and to create jobs in the face of rising popular discontent.

Protesters say these measures are not enough, and are complaining of growing unemployment and poverty. Year-on-year inflation hit 6.1 per cent last month.

The Muslim Brotherhood, its political arm the Islamic Action Front (IAF), and the country’s 14 trade unions say they will hold a sit-in outside parliament on Sunday to “denounce government economic policies”.

“We demand a solution to this problem to avert any negative repercussions  through reforming policies and carry out true and fair economic and political reforms,” the trade unions said in a statement.

Jordan’s budget deficit hit a record $2 billion in 2009, 9 per cent of GDP, as public finances came under strain after the global downturn. The deficit is expected to narrow to 5 per cent of GDP this year as tough spending cuts take effect.

The kingdom had experienced civil unrest in the past over fuel price hikes and attempts to end bread subsidies. The government has already allocated 170 million dinars in the 2011 budget to subsidise bread, on which many poor in the country of 7 million people depend, officials said. 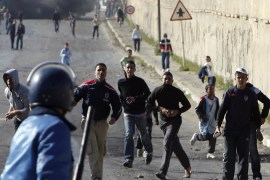 Why are the EU and the US largely ignoring the unfolding tragedy in Algeria and Tunisia? 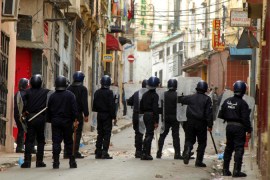 As Algerians protest, we ask if the anger spreading across North Africa is only about food prices and unemployment. 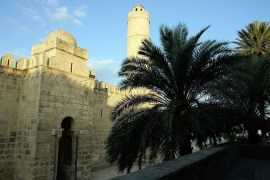 The protests in Tunisia reflect an underlying dissatisfaction with the government that stretches years back.