Tunisia’s president has said in a live TV address that 300,000 extra jobs will be created in the north African nation.

At the same time, Zine El Abidine Ben Ali has described the ongoing protests over high unemployment and cost of living as “terrorist acts” and vowed to deal with those involved.

“The events were violent, sometimes bloody, and caused the death of civilians and wounded several members of the security forces,” he said on Monday, alluding to the protests in different parts of Tunisia that are believed to have claimed 14 lives since Saturday.

“The events were the work of masked gangs that attacked at night government buildings and even civilians inside their homes in a terrorist act that cannot be overlooked.”

But speaking to Al Jazeera from Tunis, Ahmed Najib Chebbi, leader of the Democratic Progressive Party, challenged the official line that the police have been firing in self-defence, asserting that “the demonstrations were non-violent and the youths were claiming their rights to jobs”.

He said 27 people were killed in demonstrations on Sunday, and another 12 on Monday.

“The funeral processions [for those killed on Sunday] turned into demonstrations, and the police fired [at] the youths who were at these … processions,” Chebbi said.

Reacting to Ben Ali’s remarks blaming the violence on “terrorists”, Chebbi said that Tunisians were “claiming their civil rights, and there is no terrorist act … no religious slogans” and accused the president of “looking for scapegoats”.

“The people do not believe in promises,” he said. “What does this mean? How will these jobs be created?”

Earlier, Ben Ali was quoted as saying the violent protests were unacceptable and could harm the country’s interests by discouraging investors and tourists who provide a large part of the country’s revenues.

And on Monday, Tunisia’s education ministry announced that all schools and universities in the country would remain closed until further notice.

“Following violence in universities and lycees, and while awaiting an investigation to establish who was responsible for inciting students, we have decided to stop all the lessons in all educational establishments … from tomorrow, Tuesday, until further notice,” Tunisia’s TAP news agency quoted the education ministry as saying.

Chebbi, the Tunisian opposition politician, said the move was made “because the whole youth is supporting the protesters”.

The Tunisian government has said that it would listen to protesters. Samir al-Obaidy, the country’s communications minister, told Al Jazeera that the government was responding to the unrest.

“The message has been received by the government and all political channels,” he said.

“With the backing of the president, we have already put in place urgent measures and allocated $5bn for the development of various areas.”

Government officials reported that 14 people were killed since Saturday in clashes between the security forces and protesters in the towns of Thala, Kasserine and Regueb.

Tunisian union sources said that the number was at least 20.

Belgacem Sayhi, a teacher and trade union activist, said that the victims in Thala were between 17 and 30 years old, and were killed when the police opened fire on the crowd.

Protesters had set fire to the offices of the ruling political party, and the government said that police only fired back when warning shots failed to disperse the crowds.

In a statement, several political parties and movements, including the Progressive Democratic Party and the Renewal Movement, called on the government to stop the violence.

They called for “a ceasefire and the return of all military and security forces to their compounds”, as well as the “release of all detainees including political ones”.

The opposition also demanded more freedoms and asked the government to respect the political will of the people.

Protests were also seen in Jendouba, a city in the northwest, and in Haffouz and Hajeb, in Kairouan, where witnesses said protesters burned down the municipality headquarters.

Lina Ben Mhenni, a Tunisian blogger and university assistant, told Al Jazeera that “a lawyer confirmed that more than 20 people were killed in Thala and Kasserine alone”.

“Last night I went to the hospital in Regueb, a town that is 38km from Sidi Bouzid, and can confirm that at least five people were killed,” she said.

“Among them was a young woman of 26 years old, who is a mother of two children. I went to her home and her family said that she was not taking part in the demonstration – she was just walking past the area.”

Al Jazeera has been unable to verify the death toll in Tunisia from independent sources.

Ben Mhenni told Al Jazeera said that she tried to visit Kasserine as well, but police had cordoned off the town and did not let her in.

Union sources said that security forces surrounded the headquarters of the Federation of Labour in the city, trying to break into it.

The clashes are reported to have also spread to the town of Sousse on the eastern coast of the country.

“In Sousse, students organised a rally that ordinary citizens also joined, and the police were very violent towards them,” Ben Mhenni said.

She said she knows two students who were detained during that rally and subsequently released.

Another person who has been released is Hamada Ben-Amor, a 22-year-old rapper, known to fans as The General.

He was arrested after posting a song on the internet titled “President, your people are dying” that talks about the problems of the youth and unemployment.

“After three difficult days my brother has returned to us safely,” the rapper’s brother, Hamdi Ben-Amor, said on Sunday, without giving further details.

In the interview to Al Jazeera, al-Obaidy, the Tunisian communications minister, told Al Jazeera that the government was ready for a dialogue with young people.

The US state department last week expressed concern about the demonstrations, as well as the hacking into emails and Facebook by the Tunisian government.

Catherine Ashton, EU foreign policy chief, said that she was “concerned” about the events and called for restraint and the immediate release from detention of those detained after peacefully protesting. 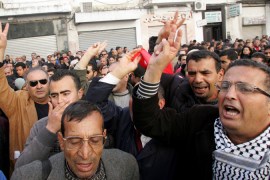 The mainstream media denounces crackdowns on Iranian bloggers, yet ignores attacks on activists in Tunisia.