Algerian authorities have vowed to punish those responsible for nationwide food riots in which at least four people were reported killed and more than 800 injured.

He said around 1,000 protestors had been arrested, many of them minors, during the weekend disturbances, adding that they would appear before judges beginning Sunday.

Out of the 826 people injured, the minister said 763 were police.

The government on Saturday said it will cut taxes and import duties on some staple foods, amid a series of deadly riots that have killed at least three people.

According to state media, a meeting of ministers in the capital Algiers agreed to measures which would reduce the price of sugar and cooking oil by 41 per cent.

“Nothing can cast doubt on the resolute will of the state, under the direction of the president of the republic, to intervene whenever necessary to preserve the purchasing power of citizens in the face of any price increase,” a government statement said.

Algeria has seen three days of unrest over the rising costs of living and unemployment, which government figures show standing at about 10 per cent, but which independent organisations put closer to 25 per cent.

Layachi Ansar, professor of sociology at Qatar University, told Al Jazeera that the cutting of food taxes and duties was “a superficial measure” that doesn’t address “the deep crisis” going on in Algeria, connected with the “unequal distribution of wealth – this wealth is spoilt by corruption, by bad governance and lack of accountability of government officials and state civil servants”.

One of the three people killed was named as 18-year-old Azzedine Lebza. He was shot dead in Ain Lahdjel in the M’Sila region, 300km from Algiers, the capital.

“He died in an attempt to break into a police station,” Kablia said.

A second demonstrator was killed on Friday in Bou Smail, a small town 50km west of Algiers, he said.

“He was picked up in the street, wounded. A pathologist said he had died from wounds to the head, but the cause of death has not yet been established.”

A medical official said earlier that the man, identified in media reports as 32-year-old Akriche Abdelfattah, had been hit in the face by a tear gas canister.

The third body was found in a hotel burned down by rioters, the interior minister said.

Algiers, which has seen protests in recent days, was calmer on Saturday, but witnesses reported fresh protests in the Kabylie region.

Mustapha Benbada, Algeria’s trade minister, has said urgent measures will be taken to alleviate pressure on the population.

“From the start of next week, the situation will get better,” Benbada was quoted as saying by state radio.

But Dalila Hanache, an Algerian journalist with the news website Echorouk, said that the protests went beyond just rising prices.

“I hear young people in the neighbourhood who say these clashes and protests are not the result of high food prices only, they think there are lots of problems in this country – educational, problems in the health sectors, in all sectors of government,” she told Al Jazeera.

Mohamed Ben Madani, editor of The Maghreb Review, said the situation was “out of control” and that the protests could continue for weeks.

“The government simply ignored the people since they were elected to office and basically now they [the people] have come out into the streets asking the authorities to give them jobs and to share the wealth of the nation,” he told Al Jazeera, from London.

“I’m afraid the authorities will more [likely] crack down on those who are protesting against them rather than giving them what they are asking for. The minister this afternoon labelled them as ‘criminals’.”

Mohamed Zitout, a former Algerian diplomat, told Al Jazeera: “It is a revolt, and probably a revolution, of an oppressed people who have, for 50 years, been waiting for housing, employment, and a proper and decent life in a very rich country.

“But unfortunately it is ruled by a very rich elite that does not care about what is happening in the country – because they did not give people what they want, even though the government has the means to do so, the people are now revolting.”

Young people clashed with police in Algiers and several other towns across the country on Friday despite appeals for calm from imams.

In Annaba, 600km west of the capital, rioting broke out after Friday prayers in a poor neighbourhood of the city and continued late into the night. A local government office was ransacked, according to witnesses.

Protesters also cut down electricity poles during the night, cutting off power to the working class suburb of Auzas.

In Tizi Ouzou, the capital of the eastern Kabylie region, residents said rioting had spread from the city centre to the outskirts, and demonstrators burning tyres blocked the main road to Algiers. 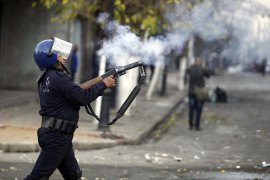 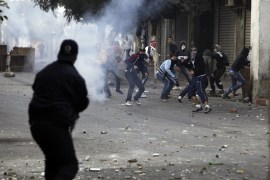 Government officials to hold meeting after one protester dies in the latest violence over rising prices. 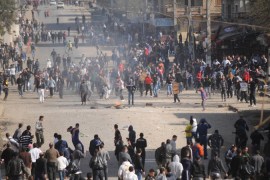 Police step up security across Algiers in wake of second wave of riots protesting inflation and unemployment. 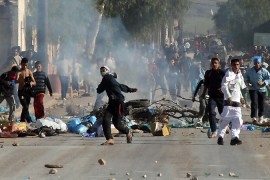