Mozambique will reverse an increase in the price of bread that sparked deadly rioting last week, and
restore some subsidies for electricity and water.

The government had previously said that the hike in food prices was “irreversible”.

After an emergency cabinet meeting on Tuesday, Aiuba Cuereneia, the planning minister, read out a statement saying government would “maintain the previous price of bread through the introduction of a subsidy.”

The cabinet also agreed to scale back an increase in the electricity prices charged to most consumers, and will also withdraw increases in water prices.

The price hikes kicked off three days of rioting last week that left 13 dead and about 400 injured.

The government said 286 people were arrested.

Thousands of people have been angered by a 30 per cent increase in the price of bread and higher electricity and water tariffs.

The government-imposed price rise took the cost of a bread roll — the bread staple of Mozambicans — to 20 U.S. cents in a country where the average worker earns around $37 a month.

Cuereneia said old prices of imported food like some vegetables and rice would be maintained through the reduction of customs duty and value added taxes.

Electricity prices would also be rolled back while new water connection fees would be reduced by 50 percent.

Severe droughts in Russia and eastern Europe have caused worldwide wheat prices to rise and are partly responsible for Mozambique’s higher living costs.

Mozambique is also heavily dependent on imports from South Africa, which have become more expensive in recent months as the South African rand currency has strengthened. 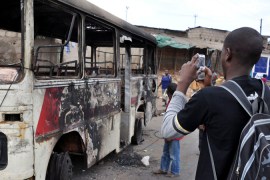