A brief window of good weather on Monday allowed the search for victims and surviors of the worst flooding the country has seen in 60 years.

At least 44 people have been killed, and 16 others were still missing after a series of landslides, mudslides and wall collapses that followed weeks of heavy rain in the impoverished and mountainous Central American nation.

There are “43,043 people at risk, 11,495 have been evacuated, 9,160 are in shelters and 56 people have been injured,” according to a statement from Guatemala’s National Coordination for Disaster Reduction (Conared).

“It’s a national tragedy,” president Alvaro Colom said as he visited a site where up to 40 people were thought to have been buried alive in a mudslide.

“This weekend alone we have seen damage comparable to what we experienced with Agatha,” he added, referring to a tropical storm in May that killed at least 165 people and left thousands homeless.

“It is a very painful thing that poor people end up being the ones hurt by natural disasters,” Colom said, urging people only to use the main highway if they had no other option “because there are landslides all over the place.”

“Many here told me that they are yet to see sufficient aid from the authorities,

“The situation is getting increasingly desperate, as there is also very little drinking water left.”

The threat posed by the landslides was not over, with forecasters predicting more rain later on Monday.

Late on Sunday, a fresh mudslide in northern Guatemala killed one person and injured eight, including two children, and forced rescue work to be suspended.

On the same day, rescuers dug nine bodies out of a 300m deep ravine off the main Pan-American Highway, west of the capital Guatemala City.

Fire service spokesman Cecilio Chacaj told AFP news agency some 40 people were believed to have buried there as they tried to help the occupants of five vehicles and a bus swept into the abyss by a previous landslide.

Ten people were killed in a separate incident on Saturday when a bus on the main highway was buried near the town of Chimaltenango. Rescuers managed to unearth 20 survivors.

Officials have said that the torrential downpours had caused almost 200 landslides, wall collapses and mudslides across the country.

Three regions in the country’s south, Escuintla, Retalhuleu and Suchitepequez, were placed on red alert.

With more heavy rain forecast, authorities have closed part of the Pan-American Highway.

Central America has been lashed by an unusually fierce rainy season this year.

The recent bad weather has killed 55 people in Honduras, at least 40 in Nicaragua, nine in El Salvador and three in Costa Rica. 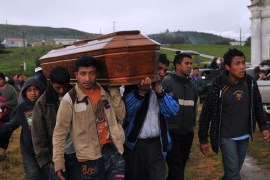 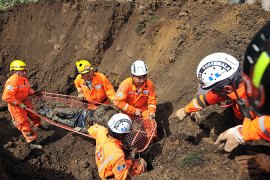 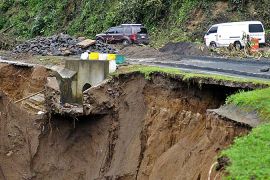