India has offered to hold talks with Kashmiris and review its heavy security presence in the Himalayan region in an attempt to bring under control a wave of separatist unrest.

The proposals were part of an eight-point plan put forward on Saturday by Palaniappan Chidamabaram, the Indian interior minister, after he led an all-party mission to the disputed Muslim-majority region.

“The government of India will appoint a group of interlocutors under an eminent person to begin the process of a sustained dialogue” with a wide swathe of Kashmiris, including political and youth groups, he said.

More than 100 people have been killed since early June as stone-throwing protesters have clashed with security forces. The civilian demonstrations have been the largest since an armed uprising against Indian rule in 1989.

Most of the victims, many in them in their teens, have been killed in live firing by police and paramilitary troops, while others have been hit by tear-gas shells or rubber bullets.

The recent protests were ignited on June 11 by the death of a 17-year-old student hit by a tear-gas shell during a clash with police. Since then Indian-administered Kashmir has been paralysed by demonstrations, strikes and strict curfews imposed to stem the unrest.

The Congress-led government has been accused in the Indian media of letting the situation spiral out of control and the eight-point plan is the first major initiative to deal with the clashes.

Chidambaram said the state government would be told to immediately free some 255 protesters jailed for throwing stones at security forces and compensate the families of the dead protesters.

Authorities will also consider reducing the security presence in the heavily militarised Kashmir valley, the hub of separatist sentiment.

In particular, Chidambaram said, officials would look at reducing the large number of security checkpoints that are deeply resented by locals.

“We will request the state government to immediately convene a meeting of the [security] Unified Command and to review the deployment of security forces in Kashmir valley, especially Srinagar,” he said.

Rights groups have long pushed for repeal of the act to reduce public anger.

“We think these steps should address the concerns of different sections of Jammu and Kashmir, including [those of] the protesters,” Chidambaram said.

Some separatists said they would meet to discuss their response, but other analysts say a lasting peace deal would be difficult given conditions on the ground.

“It will be discussed in a threadbare manner so we can give our reaction,” said Yasin Malik, a veteran separatist leader.

But Syed Ali Shah Geelani, a separatist who has orchestrated the protests, said “none of our demands have been considered by government of India and the foremost among those was accepting Jammu and Kashmir as a disputed territory,” the news agency Press Trust of India reported.

He called the initiative “mere eyewash” and announced a 10-day protest.

Geelani has previously laid down five conditions for a dialogue with New Delhi, including India accepting Kashmir as an international dispute, revoking the Special Powers Act and demilitarising the region.

Sajjad Ghani Lone, a former Kashmiri politician, told Al Jazeera that: “It is not a matter of accepting or rejecting [the initiative]. The more important thing is that there have been many such offers in the past and there differences between the words and the deeds.”

“[A]t the moment, there is a lot of repression on the ground that’s why it [the initiative] is being taken with some cynicism. If they implement them, in spirit and in deed on the ground, then it is going to make a difference,” Lone said.

Kashmir is divided between Pakistan and India, which each claim the region in full. The dispute over the region has triggered two of the rival nations’ three wars since partition of the subcontinent in 1947.

While violence has fallen to a 20-year low, alienation of ordinary Kashmiris, especially young people, has been stoked by India’s massive security presence. They have expressed their anger on social networking sites such as Facebook and by pouring into the streets.

Omar Abdullah, the chief minister of Kashmir, welcomed Chidambaram’s proposals and promised to hold a meeting in the coming days to “discuss the modalities of reducing the footprints of security forces in cities”.

“[I] hope this [the conciliation plan] will be the first step to the final destination of reaching a political solution to the Kashmir issue,” he said. 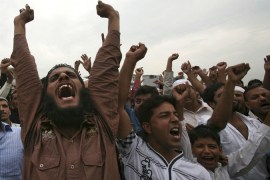 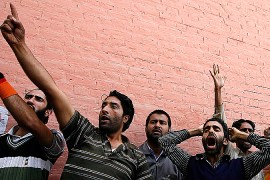 Politicians cut short visit to Srinagar hospital after being heckled by pro-independence protesters. 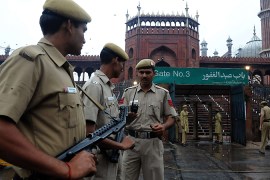 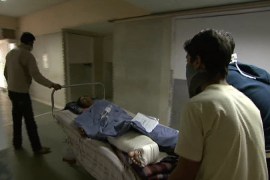 Medical services struggle to care for protesters wounded in clashes with Indian police.