Iran’s president has defended remarks he made on 9/11 attacks during his speech at the UN General Assembly.

Mahmoud Ahmadinejad said on Friday that the background to the attacks on the World Trade Center and the Pentagon in the US in 2001 was “suspicious”.

A day earlier US and several Western diplomats walked out of the UN summit as Ahmadinejad said many believed “some segments within the US government orchestrated the attack”.

Speaking to journalists in New York on Friday, he challenged the UN to set up a fact-finding mission to investigate the attacks in which almost 3,000 people died.

“I did not pass judgement, but don’t you feel that the time has come to have a fact finding committee,” Ahmadinejad said.

The White House described the remarks as the latest in a long list of outrageous comments that would deepen Tehran’s isolation from the international community.

Barack Obama, the US president, on Friday described the Iranian president’s remarks as  “offensive and hateful”.

“And particularly for him to make the statement here in Manhattan, just a little north of Ground Zero, where families lost their loved ones, people of all faiths, all ethnicities who see this as the seminal tragedy of this generation, for him to make a statement like that was inexcusable,” he said in an interview with the BBC Persian news service.

The US and its Western allies are locked in a standoff with Iran over its nuclear programme, which Washington believes aims to produce atomic weapons but which Tehran says is for solely peaceful purposes.

In a speech at the UN on Thursday, Obama reiterated the US position that the door to diplomacy with Iran remained open but that Tehran must fulfil international obligations over its nuclear programme.

Al Jazeera’s James Bays, reporting from the UN headquarters, said Ahmadinejad’s remarks had stirred anger in the US.

“This has really touched a raw nerve here. Many people you speak to are very, very angry about the comments,” he said.

However, our correspondent said that after lashing out at Ahmadinejad’s remarks, Obama had renewed his offer for talks with Iran.

“I think the Americans are trying to put this spat behind them and move on because they really do feel that there is the possibility of fresh talks with Iran. They know this is an important opportunity.

For his part, Ahmadinejad told a news conference on Friday that he was ready for talks with the international community. He said an Iranian official might meet next month with world powers to prove that Tehran’s nuclear programme is purely peaceful.

The UN Security Council in June imposed a fourth set of sanctions against Iran over its refusal to stop enriching uranium and to prove Iran is not trying to build an atomic bomb. The European Union and the US have added even more extensive sanctions targeting its foreign trade.

Asked what other actions could be taken if sanctions do not work, Obama said on Friday: “There are a whole host of options. And these options would be exercised in consultation with the international community.”

Without specifying what additional options he had in mind, Obama said a diplomatic solution remained possible. “But it is going to require a change in mindset inside the … Iranian government.” 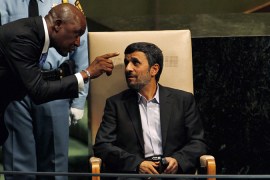 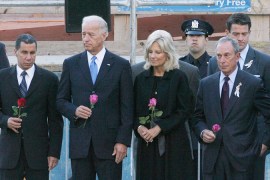 Ahmadinejad and the 9/11 attacks