US diplomats and other Western delegations have walked out of a United Nations summit as the Iranian president said some believe the 9/11 attacks on the US was the work of Americans to save Israel.

Two US officials led the walkout as Mahmoud Ahmadinejad addressed the General Assembly in New York on Thursday. They were quickly followed by the British and other Western delegations.

Ahmadinejad said there was a theory that “some segments within the US government orchestrated the attack to reverse the declining American economy and its grips on the Middle East in order also to save the Zionist regime.

“The majority of the American people as well as other nations and politicians agree with this view,” he said.

PJ Crowley, the US assistant secretary of state, told Al Jazeera the statement was “totally outrageous”.

“[Those killed in the attacks] were people of all faiths, all nationalities. They were killed by 19 people, a plot perpetrated by al-Qaeda,” he said.

Lawrence Cannon, Canada’s foreign minister, called Ahmadinejad’s comments “unacceptable” and “a blatant violation of international standards and of the very spirit of the UN”.

About 3,000 people died when hijackers crashed planes into the World Trade Center and the Pentagon and a fourth aircraft plummeted into a Pennsylvania field in 2001.

“So you can now say President Ahmadinejad is both a 9/11 denier and a Holocaust denier.

“And that simply does not set a positive tone for any negotiations with the Americans, but also underlines that Iran is not interested in talks anytime soon.”

Ahmadinejad briefly touched on the four sets of UN sanctions imposed on his country over Tehran’s refusal to stop enriching uranium and to prove Iran is not trying to build an atomic bomb.

Some members of the Security Council have “equated nuclear energy with nuclear bombs,” Ahmadinejad said.

He accused the US of building up its nuclear arsenal instead of dismantling it and reiterated his call for a nuclear-free world.

The UN Security Council in June imposed a fourth set of sanctions against Iran and the European Union and the US have added even more extensive sanctions targeting its foreign trade.

Iran insists that its nuclear programme has only peaceful intentions.

In his speech, Ahmadinejad condemned some of the permanent members of the UN Security Council – Britain, China, France, Russia and the US – for monopolising nuclear power.

He said the criticism of Iran comes “at the same time they have continued to maintain, expand and upgrade their own nuclear arsenals.”

He said 2011 should be declared a year of nuclear disarmament – “Nuclear Energy for All, Nuclear Weapons for None”.

Ahmadinejad said that Iran was ready for negotiations but dismissed suggestions that such an act would be giving in to international pressure.

“We have never submitted to illegally imposed pressures nor will we ever do so. It has been said that they want to pressure Iran into a dialogue,” he said.

“Firstly, Iran has always been ready for a dialogue based on respect and justice. Secondly, methods based on disrespecting nations have long become ineffective.”

Hours before Ahmadinejad’s speech, Barack Obama, the US president, told the General Assembly that the US was open to diplomacy with Iran only if it proves that its nuclear ambitions are peaceful.

“The United States and the international community seek a resolution to our differences with Iran, and the door remains open to diplomacy should Iran choose to walk through it,” he said.

“But the Iranian government must demonstrate a clear and credible commitment, and confirm to the world the peaceful intent of its nuclear programme.”

However, Obama also noted that he made the same overture, in the same forum, a year ago, and tensions continue.

About 800 people including many of Iranian origin protested outside the UN headquarters as Ahmadinejad was attending the General Assembly.

They chanted “Ahmadinejad is a terrorist” and staged a street performance depicting people stained with fake blood and scenes of hanging and stoning.

“It is time for the international community to stop dealing with Ahmadinejad and finally recognise and empower the opposition, so that the Iranian people can finally get the democratic change it deserves,” Ali Safavi, a demonstrator, said.

Many of the demonstrators were affiliated with the the People’s Mujahidin Organisation of Iran, which is officially listed as a foreign terrorist organisation in the US, although a judge ruled in July that it should be removed from the blacklist. 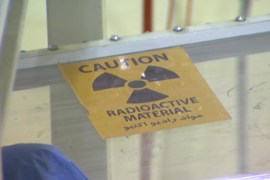 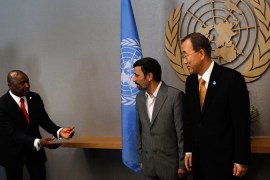 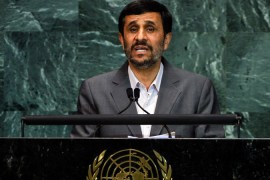 Iran’s president takes centre-stage at the United Nations but his attack on the “unjust” West failed to be heard. 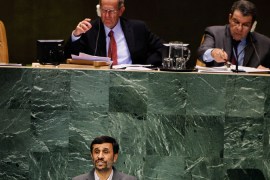