Fears of fraud are growing as election officials in Afghanistan continue to tally votes following a crucial parliamentary poll.

About 3.6 million votes have been counted so far in the exercise that began on Sunday, but the votes represent only a small fraction of the 11.4 million Afghans eligible to cast their votes.

The Independent Electoral Commission said the total number of votes cast was about four million.

Al Jazeera’s James Bays, reporting from the capital, Kabul, said there were “all sorts of allegations of fraud coming from across the country”.

“We’ve people who have been able to wash the ‘indelible’ ink off their fingers; we have voter registration cards – fake ones – which were definitely used, we are told, in some areas and we have been told of some polling stations where one candidate allowed only his supporters to go inside,” he said.

The electoral commission said three of its staff had been killed in the north of the country, but added that the process of transferring preliminary results and ballot boxes from polling stations to provincial centres was going well.

Fake voter cards flooded into Afghanistan in the run-up to the balloting, but election officials had said that poll workers were trained to spot them.

Afghan election observers said on Sunday they had serious concerns about the legitimacy of Saturday’s vote.

The Free and Fair Elections Foundation of Afghanistan (Fefa) said there were “serious concerns about the quality of elections”, given the insecurity and numerous complaints of fraud.

Fefa deployed about 7,000 people around the country, making it the largest observer of the parliamentary vote.

Many international observer groups scaled back their operations from last year because of security concerns.

Peter Galbraith, the former UN deputy special representative for Afghanistan, who was sacked for having complained about fraud in last year’s presidential vote, said the elections were “significantly fraudulent”.

“This is hardly the voice of the Afghan people,” he told Al Jazeera.

“Very few Afghans voted. The estimates are in the range of three million. A year ago, there were six million votes even removing the one and a half million that were fake Karzai [Afghan president] votes.”

Galbraith’s comments came as General David Petraeus, commander of Nato and US forces in Afghanistan, and Ban Ki-moon, the UN secretary-general, both congratulated Afghans for their courage in participating in the elections.

The vote count followed a day of violence as the Taliban launched a wave of attacks aimed at disrupting the poll.

The British defence ministry announced on Sunday that two British soldiers had been killed in an explosion, but it said the deaths were unrelated to violence in the country’s election day.

“The soldiers were killed in an explosion yesterday, September 18th, during a vehicle patrol in the Lashkar Gah District of Helmand province,” the ministry said in the statement.

Afghan officials said the security situation did have an impact on the polls, prompting many Afghans to stay away from polling stations.

The vote was the second parliamentary election to be held in Afghanistan since the Taliban was toppled by the US-led invasion in 2001.

Our correspondent said that releasing the results would be a “long a process”.

“There’s an election complaints commission that’s in place [but] some are very critical of that because the rules … were changed; the structure was changed,” Bays said.

“It now has got a majority of Afghans … and they were appointed by Hamid Karzai and some opposition politicians say that’s not as good as the system that existed one year ago for the presidential elections.”

Karzai, who won fraud-marred elections a year ago, described Saturday’s vote as a step towards a brighter future.

“We hope nobody will be deterred by security incidents, although there will undoubtedly be some,” he said, as he cast his ballot. “This will take Afghanistan several steps forward into a brighter future.”

More than 2,500 candidates were contested 249 seats in the lower house of parliament, or Wolesi Jirga. Among them were 406 women contesting 68 seats reserved for them under legislation designed to better their rights.

Afghans reported being able to rub the ink off their fingers with little effort, despite officials saying that it was the best quality indelible ink available. 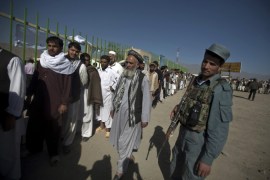 International observers and activists say voter turnout in Afghanistan has been closely linked to security. 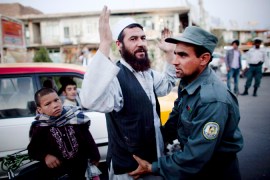 Al Jazeera takes to the streets with Kabul’s security chief in the parliamentary polls’ run-up. 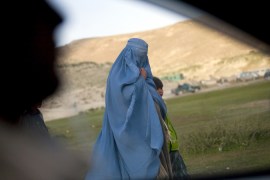 My new life in a fractured land