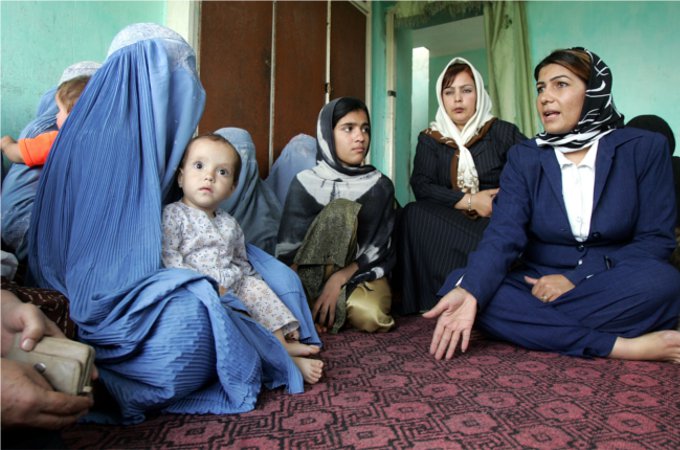 Neema Soratgar Formuly, right, is one of the 413 female candidates facing heavy odds in the election [GALLO/GETTY]

Suraya Pakzad, an internationally recognised women’s rights advocate, was born in Afghanistan in 1968 and came of age during the Soviet invasion of her country.

In 1998, following the rise to power of the Taliban, Pakzad founded the Voice of Women Organisation (VWO) in Kabul to secretly educate girls who were forbidden from attending school by the Taliban’ repressive interpretation of Islamic law.

On September 23, she will receive a Global Citizen award from the Clinton Global Initiative.

She spoke to Al Jazeera by telephone from her office in the western city of Herat ahead of Afghanistan’s parliamentary elections on Saturday, in which 413 female candidates are running.

By law, 68 of parliament’s 249 seats are reserved for women.

Female candidates have faced persistent violence and threats throughout the past five months of campaigning.

The interview has been condensed and edited for clarity.

On the state of women’s participation in the election amid a worsening security situation:

I see that particularly in the political process, [participation] has doubled, including young people, doctors, people from all walks of life are running for parliament. They want to be part of the body that will change the law.

Their campaigners are intimidated, they’re receiving much threats via phone calls, via threat letters, and some of them, especially in Herat where I live – one candidate lost five of her campaigners. They were beheaded.

It’s not only the way they are treating them … their children, their husbands are threatened because a member of their family is applying for parliament.

Security is really getting worse day by day, but women’s political participation has increased, now women know how they should run for parliament, now they know if they have enough seats they’ll have enough voices in parliament.

Last time, in Kandahar province, there weren’t enough women running for parliament to take the five seats reserved for them.

Just a few minutes ago, I called one of the villages in my district because one of my friends wants to pass on information about women candidates there, if they can vote for them, and they were disappointed.

They were hoping that they could go to their polling centre … on the 18th of September, but they said last night someone put a bomb in front of the polling centre at the school there, and today the bomb was removed by the government forces, but that has created a real, real fear among the villagers.

Now everybody will stop their families from going.

On major issues for women this election:

When parliament passed the personal Shia law … which allows extreme violence against women … many women were encouraged and thought that they should stand for parliament to be against those kinds of laws and those kinds of decisions … and that decision encouraged them to be on the front line.

[Note: Last year, parliament passed the Shia Personal Status Law, a bill reportedly favoured by conservative Shia legislators and clerics. Among other things, it forces women to grant their husband “sharia rights” to sex and includes a provision allowing husbands to prevent their wives from leaving home except on urgent business. Hamid Karzai, the Afghan president, had promised to review the law or send it back to parliament, but did not].

Warlords and hardliners made the law. When that got passed by the parliament, that was a really bad message and the women candidates can use that as an example: If strong women aren’t there, then those laws can be finalised.

The campaigns of female candidates can tell voters, “Many laws like that law will be passed by the parliament … so please vote for her if you want to have a voice over there”.

We all went to the president of Afghanistan and the US embassy to relay our concern, and finally we were not able to change the law.

When the government of Afghanistan signed, there is no way to change it.

But in the cities, [women] are able to conduct their meetings … there is media access. They are paying for airtime, they are paying for newspapers, but still they have the chance to talk to people and disseminate their message to people why they are going to parliament.

From two months ago, Herat National TV did a special programme with five or 10 minutes for each candidate.

They get a chance to be in the political game. Men and women get equal time. Every night a certain number of candidates were invited, many refused to go; many were afraid to go on live TV.

Journalists are asking the questions: What are your main goals? But then anyone can call the phone number on TV for free and easily they can collect them. And that programme was live, nobody charged them. Journalists asked them about their programmes.

That is a chance to know them better than having a brochure or having a picture.

On how women campaign in a dangerous and conservative country:

Men candidates also have the same security problems, but women have their own problems conducting their campaigns because compared to the men running for parliament, women don’t have the same capacity.

Women feel particularly targeted at a time when they believe it is crucial for them to be politically engaged.

There is a fear growing, you know, that hard-fought gains for women here will be lost if the government and the Islamic insurgents strike a deal. They don’t have enough resources, they don’t have any support … but they know if the parliament is taken over by warlords … the years of war will be lost.

For women to be face-to-face with men, they have their own campaigners they are sending. But no one can present yourself as you can, no one can trust your campaigner as they trust you. It’s an obstacle in their way.

They are talking differently for the different audiences. For the women they are focusing mostly on the women’s issues: We will change the law so that your equality should not only be in principle but should be practical. We are forced to be backwards. It is because of these warlords, it is because women were not part of the nation building.

They try to teach them that women have cleaner hands than men, and it shows in Bamyan. One woman there is doing a fantastic job, even though she is facing so many challenges, and the corruption is less in that province than in any other province in Afghanistan.

[Note: Habiba Sarabi, a minority Hazara Shia, was appointed governor of Bamyan Province by Karzai in 2005. She is the only female governor in Afghanistan. Karzai appointed the first female mayor in 2008 when he put Azra Jafari in charge of Nili, the capital of Daikondi Province].