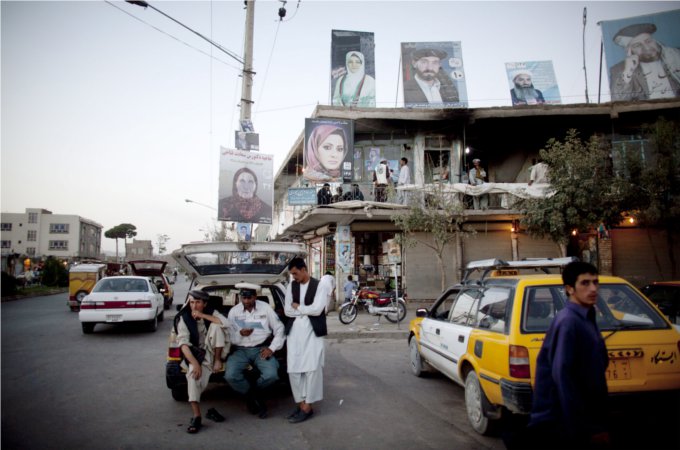 Candidates running in Afghanistan’s parliamentary election have appealed to voters largely on sectarian lines and have worked powerful connections rather than make broad, issue-based appeals [GALLO/GETTY]

Talking to Sanjar Sohail, the Kabul-based owner and publisher of Hasht-e-Sobh – or 8am – a daily newspaper in Afghanistan, you get a sense of the lowered expectations surrounding Saturday’s vote, only the second post-invasion parliamentary election in his country.

Taking into account the worsening security situation, Sohail said, “the numbers of incidents against candidates is very low. We lost just three candidates during the campaign period, and 53 campaigners”.

“Lost” is a polite way of putting it. Residents of the Qarabagh district in Ghazni Province found the beheaded body of candidate Najibullah Gulistani outside his home in early August around a week after he had been kidnapped. A bomb planted in a mosque blew off the legs of Sayedullah Sayed in Khost Province in late July; he died of his wounds. And in western Herat Province, Abdul Manan Hashimi Noorzayee was shot dead on August 28 by a man on a motorcycle as he travelled to a mosque.

Violence and threats against candidates, their supporters and average citizens have been widespread in recent months, yet around 2,500 Afghans – including 413 women – have still been doing their best to secure a place in the country’s 249-seat lower house of parliament, the Wolesi Jirga.

Western-style campaigns replete with battling political parties, massive rallies, and debates over national issues are scarce, if not nonexistent, but elements of the style can be found, and candidates have still put on the charm to convince voters face-to-face.

Yet other aspects of the 2010 Afghan parliamentary race have been decidedly emblematic of the society: campaigns based more on familial and ethnic ties, a lack of organised political groups, and voters more concerned with paved roads than national, let alone foreign policy.

Get out the vote

Signs of a vibrant Afghan electoral season have appeared most obviously in swaths of brightly coloured campaign posters raised around the country, particularly in urban centres like Kabul Province, where a sharp jump in the number of female candidates – 55 more than there were in the 2005 parliamentary election – reflects a growing interest in political life.

“Inside Kabul the campaign was really hot,” Ajmal Samadi, the director of the Kabul-based Afghan Rights Monitor, said.

But in rural and insecure districts in the south and east, and to a lesser extent in the north, election and human rights observers say, politicians have been hard-pressed to mount energetic campaigns.

“Outside Kabul and in particular the southern provinces … we had colleagues there who reported the situation is not as lively and active,” Samadi said. “Candidates are rarely seen in public campaigning for their causes and voters certainly have fears that if they engage in any political act they will be spotted by the insurgents”.

Greg Minjack, a campaigns and political parties expert based in Kabul with Democracy International, said he has seen a drop-off in political activity compared with last year’s presidential and provincial council election, when he spent time driving around Panjshir and Parwan Provinces.

Minjack, who has also personally interviewed 16 candidates in and around Kabul, said that when politicians travel to raise support, they generally search out power brokers and relatives rather than holding large community gatherings.

“The campaign is sort of limited to … these channels in which they can have influence with voters, and either what their tribe or family was or name was or dad was,” he said.

Running on influence and history

Influence in Afghanistan often hinges on personal relations, whether with a member of government, a successful businessman or a militia. The Afghan Analysts Network documented at least 23 candidates who are related to powerful members of government, from Hashmat Karzai, a cousin of the president running in Kandahar Province, to Dr Almas Bawar Zakhilwal, the brother of the minister of finance, who is running in Kabul.

Many candidates are also former mujahideen – fighters who beat back the Soviet invasion in the 1980s. They have shown little hesitation to bank on their personal histories to encourage voters.

“They’re either posing with their brethren dressed up in [battle] clothing, or they have pictures of themselves, sort of then-and-now pictures,” Minjack said.

Samadi estimated the former mujahideen may account for 20 to 25 per cent of the candidates in Saturday’s vote; Minjack said he thought the number was likely higher.

Either way, the mujahideen seem to be the nearest thing this election cycle to a large political bloc. Because of new election laws instituted shortly before the registration deadline this year, political parties must now secure 10,000 signatures across 20 provinces. The requirement used to be 700.

Only five political parties qualified by the time the ballots were printed. Since then, another 26 have successfully registered. But it hardly seems to matter: Only 32 candidates will be officially affiliated with a party on the ballot, according to data provided by Minjack. The most – 21 – come from the Islamic Unity Party of Afghanistan.

The new signature requirement seems aimed at ensuring that political parties will in future elections represent a large and hopefully diverse national constituency, rather than a few hundred people who might be more inclined to affiliate by ethnicity, religion or tribe.

“I think the people have seen them for what they have been, which is either for tribes or illegal armed groups, or even going back to the Soviet time, the leftover socialist parties,” Minjack said.

But the lack of parties also reflects the absence of any cross-cutting, national political issues this election.

“Unfortunately the current political system in Afghanistan is based on … what you get at the end of the day, how much you’re paid, where are your interests,” Samadi said.

“One of the problems that Afghanistan has been facing over the last couple of years is a lack of strong democratic leaders,” he said. “We don’t have that kind of leadership in Afghanistan where all people across the country could see their interests.”

The man who has arguably come closest is Abdullah Abdullah, Karzai’s former foreign minister, who forced a run-off vote in last year’s presidential race before bowing out.

But Abdullah, despite efforts to form a countrywide political movement known as the Coalition for Change and Hope, which he has claimed commands a bloc of 50 members of parliament, has maintained a low profile this election. And in a system with no functioning national political parties, nobody has taken on the mantle of an opposition figure.

“It’s difficult to say that we have opposition,” Sohail, the newspaper publisher, said. He mentioned Ramazan Bashardost, a populist famous for living in a tent, reportedly giving away money to the poor, and driving around the country in a small, rust-covered Suzuki car that broke down at the end of his campaign. Bashardost won a number of districts in central Afghanistan and the third-most votes overall, but has not made an appearance this summer.

The only organisations with “critical mass” in the political system, Minjack said, come from within the existing power structure of ex-mujahideen, militia commanders and large families such as Karzai’s.

“There’s no bankers’ association, there’s no real chamber of commerce, there’s no trade unions, there’s no manufacturing associations, no environmental groups,” he said. “Until you get that, all you’re going to have are the muscular organisations, the tribes, the families … armed groups.”

Minjack said he had spoken with a former political adviser to Abdullah – a man who now advises the head of the Independent Election Commission, Fazel Ahmad Manawi – who told him Abdullah was uninterested in stepping up as a lone opposition figure, a lone “sore loser”. Rather, Abdullah and his supporters are working to organise a movement utilising the framework of the old anti-Taliban Northern Alliance, for which Abdullah once worked as spokesman and deputy foreign minister.

“At this point there’s no obvious opposition, Abdullah still doesn’t look like he’s going to step up at this time,” Minjack said. “But there might be something that comes out of efforts to organise some of the old remnants of the previous power structure he was involved with.”

But the lack of organised parties does not stop candidates from making promises and sweeping statements to energise voters – both the fuel of political campaigns all over the world.

Indeed, “change” and the fight against corruption seem to be themes this year.

“Clearly candidates understand that Afghanistan has been facing a crisis … emanating from corruption and the security [situation],” Samadi said.

But there is also widespread scepticism among voters, who doubt promises made during campaign season will be honoured and fear parliament will return to a state of rancour once again.

A report released this month by the Afghanistan Watch organisation and funded by the Afghan Analysts Network characterised parliament as being wracked by continual ethnic and sectarian fights, throwing obstacles in front of processes such as approving effective cabinet nominees.

The report quoted Kabir Ranjbar, a member of parliament, as saying that “the approaches based on ethnicity, language and religion have been a main point of the Wolesi Jirga’s weakness and the main factor for approval of the incapable and inefficient ministers. If the [members of parliament] had considered the national interests during the process of confidence voting for the cabinet nominees, the consequent confusions would have been prevented.”

Disallowing fraud that artificially inflates the vote, some observers – including Democracy International – are predicting a turnout slightly above 50 per cent.

Samadi said he would consider such a turnout a success, considering voter apathy and widespread Taliban threats of violence against anyone who participates.

“Why should people go and risk their lives for something that doesn’t mean anything,” he said, characterising how some might think. “Why should people in Kandahar, Helmand, Zabul and elsewhere participate in a process that has already lost its meaning to them? One has to be realistic in one’s expectation for this process.”