As Swedes head to the polls on Sunday, there are concerns that a nationalist party could win representation in the country’s parliament for the first time. Several opinion polls suggest that the Sweden Democrats (SD), which says it opposes the “increasing Islamification” of Swedish society, will exceed the four per cent threshold needed to win seats.

Critics have tried several strategies to prevent the party from gaining ground. Established parties have tried to keep SD out of the political debate, while activists have disrupted rallies and vandalised campaign posters. Some party members have even been attacked. But attempts to prevent SD from getting its message out have been counterproductive, handing the party the chance to portray itself as is a victim of censorship.

After TV4 refused to air SD’s campaign, the clip was viewed more than 600,000 times on YouTube. The video shows a dramatic race where a Swedish pensioner is being overtaken by Muslim women in burqas competing for welfare payments.

The party wants to cut asylum and immigration by relatives of people already living in Sweden by 90 per cent. It describes Muslim immigration as the “biggest foreign threat to Sweden since Second World War”.

“SD says a multicultural society is doomed to fail and that those coming here have to adapt, unconditionally, in issues ranging from gender equality to food habits,” Pontus Mattsson, a Swedish journalist who has been following the party closely, says.

In the 2006 general elections, SD gained seats in 145 of 290 municipalities but fell 1.1 per cent short of being represented on the national level. Now it seems it could finally make the step up.

But while support for the party is steadily growing, surveys suggest that there has been no upswing of xenophobia in Sweden, a country known for its generous asylum policies. On the contrary, tolerance towards immigrants seems to have increased and Sweden keeps its position as the country most positive to multiplicity in the European Social Survey.

Mattsson says better organisation and larger financial assets were likely explanations for SD’s success in recent years.According to a survey conducted in 2009 by the SOM Institute, housed at the University of Gothenburg, 36 per cent of Swedes said there are “too many foreigners” in Sweden, a significant drop from the 52 per cent who held the same opinion in 1993.

“It’s rather about the party wising up than about a shift in public opinion,” he says.

“There has always been a minority larger than four per cent [the parliamentary threshold] that shares the Sweden Democrats’ critical view of immigration. But this group has never before found a party considered worth voting for.”

“SD is very much a protest party. It has managed to mobilise voters who think politicians are shying away from problems.”

The smartly-dressed men leading SD today stand in stark contrast to the image the party had when it emerged from the racist movement Keep Sweden Swedish in 1988.

SD has gone through a gradual make-over, trading bomber jackets and marching boots for sharp suits and ties. In the late 1990s, party leaders repeatedly urged members not to display Nazi symbols at rallies so as not to deter potential supporters.

Andreas Johansson Heino, a political scientist at Gothenburg University, stresses that a certain degree of xenophobia has always existed in Sweden.

“There’s a gap in opinion between voters and politicians, an opinion not given a voice,” he says. “SD profits from being the only political party in Sweden criticising immigration.”

He says a shift in SD’s policy, from criticism of immigration in general terms to a focus on Islam, has been another contributing factor.

“While tolerance towards immigrants has gone up in the last decades, there has been no positive trend in the attitude towards Islam.”

A recent survey from Linnaeus University suggests that about 50 per cent of the Swedish population tend to dislike Islam. But only 19 per cent of respondents disagreed with the statement “immigrants should be able to practise their religion freely.”

Andreas Malm, who has written a book about Islamophobia in Sweden, says the same anti-Muslim tendencies can be seen there as in many other countries in Europe. He blames this partly on the weakening of the labour movement and the political left.

“It’s like a seesaw all over Europe. The weaker the left gets, the stronger the right becomes and with that also the extreme right. I think what made Sweden resistant for so long is that we have had a strong labour movement which exercised some kind of social gravitation[al] force and strived in a more solidary direction.

“Muslims have in recent years been singled out more and more as the enemies of Europe, partly of course because of terror acts. It also has to do with the Muslim minorities’ position as marginalised in our segregated societies. They have poorer accommodation than others, inferior jobs. Since they have this peripheral position, they become a suitable target for different kinds of hate and dissatisfaction.”

Jimmie Akesson, SD’s leader, has insisted that the party has a zero tolerance towards racism and accepts a multi-ethnic society where cultural assimilation is promoted.

To back up this argument, SD can point to some unexpected supporters – Iraqi Chaldeans. Some members of the conservative Christian minority have joined SD because it is the only party which opposes same-sex marriages. The party’s anti-Muslim profile is also appealing to Chaldean voters.

In Sodertalje, the town which received more Iraqi refugees than all of the US and Canada together after the US-led invasion in 2003, SD has become the party with the biggest percentage of immigrants among its candidates in local polls.

But no matter how politically-correct party representatives at national level try to be, the well-polished rhetoric is not reflected among local candidates.

On web forums and in internal meetings, prominent local candidates have been talking about immigrants with “barbarism in the backbone,” characterised by their “aggressive genes” and describing Islam as a “violent paedophilia sect.”

An investigation by the Expo Foundation, a private anti-racism research foundation, also found local SD candidates who were denying the Nazi Holocaust and signed emails with Nazi greetings.

In the early 1990s neo-Nazis and other racist groups staged large demonstrations in Stockholm and violent attacks were targeted at immigrants.

The extreme right-wing later lost strength and analysts say they do not expect a return to those dark days. In an apparent reaction to the violence, a strong anti-racism movement emerged and immigration became much of a taboo subject in the media and in political circles.

Those sensitivities were highlighted in the 2002 election campaign. When the Liberal Party, Folkpartiet, suggested a language test as a condition for citizenship. It was bombarded with allegations of racism with political rivals accusing it of flirting with far-right elements.

Before the election, the party had been close to the four per cent threshold. But in the polls, it reached 13.3 per cent, its best results in two decades.

Magnus Hagevi, an associate professor in political science at the Linnaeus University, said the language test proposal seemed to have been a strategic decision that paid off for the party.

“In Denmark, their fellow Liberals, Venstre, had been talking about playing the ‘immigration card’ to get those sympathisers of the Social Democrats who were critical of immigration to change bloc.

“Folkpartiet chose not to propose restricted immigration but to put in place a policy of demands regarding those coming, demands that they should learn the language and earn their own livings to a greater extent.”

In this year’s election campaign, no major moves have been made relating to immigration and integration, possibly out of strategy to shift attention away from the Sweden Democrats.

The ruling centre-right bloc is challenged in the polls by the opposition centre-left. Until recently, a tight race was expected and there were fears that the Sweden Democrats could get a “kingmaker” role in parliament.

However, recent polls have indicated the government has a steady lead.

Sweden has a long history of minority governments, and Hagevi says a situation where the Sweden Democrats actually gets real influence in parliament is unlikely.

“If they get into parliament but without getting any influence, and sit as a ‘lame duck’ for four years – that could be the worst-case scenario for the Sweden Democrats and they could disappear as a party.” 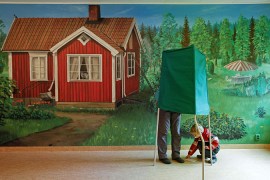 Centre-right government expected to be re-elected while far-right party may get seats in parliament for the first time. 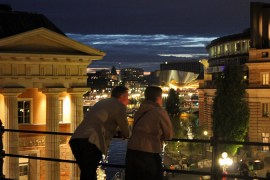