When Turks on Sunday voted strongly for sweeping reforms to their constitution, they also gave a much-needed boost to Prime Minister Recep Tayyib Erdogan’s prospects for the 2011 general elections. His ruling party is set to take part in the elections from a position of strength.

The approved changes– 26 constitutional amendments– are set to reshape the judiciary and curb the powers of the powerful military, in what is seen as a key tussle between an Islamist-influenced government and its secular opponents.

Support for the changes will give the AKP confidence that they will secure a third term in general elections due by July 2011 after what had been viewed as a crucial test that could have gone either way.

With nearly 80 percent turnout, poll results show that 58 percent voted in favour of the referendum.

After declaring victory, Erdogan, who consistently framed the proposed change as a key test to realising Turkey’s EU aspirations, said that his Justice and Development Party (AKP) would begin work on a new constitution.

“We have passed a historic threshold on the way to advanced democracy and the supremacy of law,” Erdogan told cheering supporters.

‘Good for the government’

Barack Obama, the US president, and the European Commission, the executive EU body, issued statements welcoming the result.

Ria Oomen-Ruijten, the EU special reporteur for Turkey, told Al Jazeera that the referendum was a good first step, but the country still has a long way to go in ensuring freedom of speech and religion.

“I think this is a good step in the process of reform … the wish of the European parliament is that the Turkish government comes up with a new constitution as soon as possible,” Oomen-Ruijten said on Monday.

The European Commission had earlier accused the government of stifling public debate over the proposals, while backing Ankara’s attempt to reorganise the judiciary.

Al Jazeera’s Anita McNaught reporting from Ankara, the capital, said the results are “probably better than what the government had hoped for …  a slim win for the government would have been destabilising.”

Semih Idiz, a columnist for Milliyet newspaper, agreed that preliminary results were “a good margin for the government.”

“It’s better than expected, and it’s a good endorsement ahead of next year’s elections … I think the prime minister must be feeling pretty comfortable,” Idiz told the Reuters news agency.

Erdogan had said the changes were needed to strengthen democracy and bring Turkey closer to European standards, as the country continues its bid to join the European Union.

Critics of the overhaul from the “no” camp said some of the changes would allow Erdogan’s party to take over the courts, undermining the secular nature of the Turkish state, and eroding the checks and balance system.

Kurdish activists in Turkey’s southeast, who have waged decades-long armed campaign against the government, had called for a boycott of the vote.

The AKP evolved from a series of Islamist parties banned by the courts, but denies having any aims to roll back the republic’s traditional secularism.

Polarisation over the referendum reflects Turkey’s fractured political landscape, in which a rising middle class of observant Muslims who form the backbone of the AKP have challenged a secular elite, which has traditionally held power since Mustafa Kemal Atatürk founded modern Turkey in 1923.

“The battle is really not between Islamists and secularists; the battle is between reformists and those who defend the status quo,” Ibrahim Kalin, a senior adviser to Erdogan, told Al Jazeera.

Our correspondent in Ankara said that opposition parties did not mount an effective campaign against the changes.

“The leader of the Republican People’s Party (CHP) [the main opposition] could not vote because his paper work was not in order, which was symbolic of the problems in the ‘no’ campaign,” McNaught said. 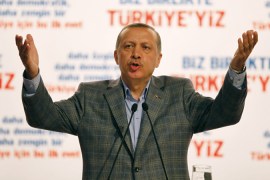 With 99 per cent of votes counted, provisional results show referendum passing with 58 per cent support. 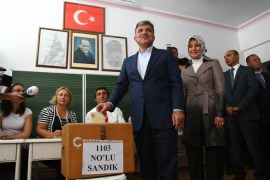 Referendum on amendments pits secular forces in the military against the elected Islamist government. 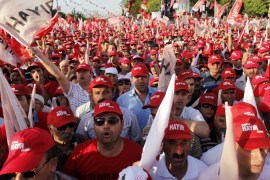 Campaigning for a ‘no’ vote

Critics of Turkey’s proposed constitutional reforms say they give the government too much power. 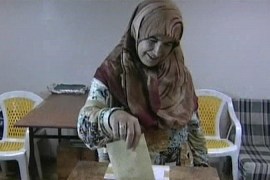 Al Jazeera’s Anita McNaught explains the most important and controversial amendments proposed by the government.