The clashes began on Sunday after Turkey beat Serbia 83-82 in a World Basketball Championship match on the previous night in the Turkish city of Istanbul, keeping them from reaching Sunday’s final.

“KFOR will not tolerate any violence in Kosovo and I ask the population in Kosovo to help that the troublemakers can be arrested.”

Hundreds of people from the ethnic Albanian-dominated southern part of Mitrovica gathered to celebrate Turkey’s victory on the Ibar river which separates the two communities.

Serbs from the north and Albanians from the south started hitting each other with stones, prompting Kosovo police and European Union security forces to close the bridge and separate the two groups.

Early on Sunday, a French police officer serving with the European Union police and justice mission (EULEX) in Kosovo was shot in the leg.

Karin Limdal, an EU spokeswoman, said the officer was not seriously wounded, saying: “We don’t know where the bullet came from or the circumstances.”

A spokesman for Nato in Kosovo said two Nato soldiers were slightly wounded in the clashes, but did not provide details. Police said that five civilians and a local police officer were also injured.

The violence highlighted continuing tensions in Mitrovica just days after Belgrade supported a compromise United Nations resolution on Kosovo, agreeing to an EU-backed dialogue with Kosovo to promote co-operation between the divided communities.

Serbia lost control over Kosovo, its former southern province, in 1999 after Nato bombing forced Serbia to end its crackdown on independence-seeking ethnic Albanians. 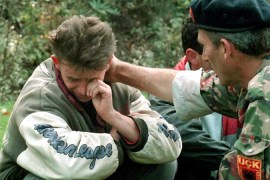 Belgrade charges former paramilitaries over killing of at least 43 ethnic Albanians in village of Cuska in May 1999. 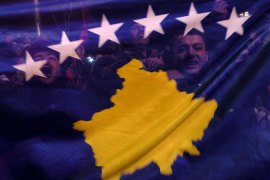 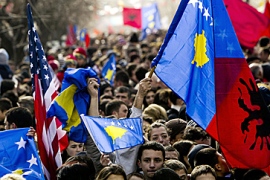 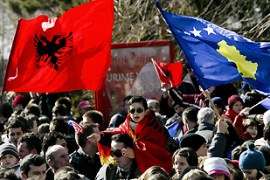