A senior Iranian prosecutor has said that his country is ready to release an American prisoner on bail. Sarah Shourd is one of three Americans held for more than a year accused of spying.

A release on bail would be granted because of Shourd’s health problems, according to the official IRNA news agency.

“Based on reports and the approval of the relevant judge about the sickness of Ms Shourd, her detention was converted to $500,000, and if the bail is deposited, she can be released,” Abbas Jafari Dolatabadi, a Tehran prosecutor, was quoted as saying.

“She can be freed by posting the bail … her lawyer has been informed.”

Masoud Shafiei, Shroud’s lawyer, said he was hopeful that she would leave prison in the next two or three days.

He said he had met the three detainees on Sunday at Tehran’s Evin prison and that they were all fine.

He told the Associated Press news agency that the Swiss embassy in Tehran, which represents US interests in Iran, was making arrangements for the $500,000 bail payment.

Shourd’s mother has said her daughter is suffering from serious health problems, including a breast lump and precancerous cervical cells.

Dowlatabadi said the conditions of Shroud’s bail did not bar her from leaving the country, though her case will still go to trial along with those of the other two Americans, who must remain in custody.

Shourd was arrested on July 31, 2009, along with her friends Shane Bauer and Josh Fattal after straying across the border from neighbouring Iraq. They have been accused of illegally entering the country and of spying.

Several Iranian officials had said Shourd would be released on Saturday as an act of clemency to mark the end of the Muslim holy month of Ramadan after the intervention of Mahmoud Ahmadinejad, the president.

Ghanbar Naderi, an Iranian political analyst, said there seemed to be “a difference in opinion between the government and the independent judiciary”.

“Obviously there is some kind of miscommunication between these two bodies,” he told Al Jazeera.

“But at the same time, it serves as further proof that there hasn’t been any backroom deal between the US and Iran as speculated by the Western media, such as a prisoner exchange.

“I can assure you that the other two will also be released but the process has to take its legal course.”

Dolatabadi said that there were “enough reasons to accuse the three of espionage”.

“The case is nearly complete and the judge has issued an indictment for the three Americans accused of spying,” he said.

Washington rejects the spying allegations and has demanded their immediate release. 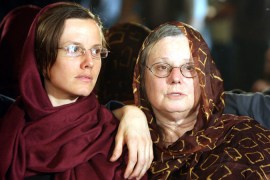