Talide Diallo, the telecommunications minister, said on Sunday that 54 people were wounded when rival political parties clashed after a campaign event.

He added that while rallies and campaigning are suspended, elections will be held as scheduled on September 9.

Supporters of Cellou Dalein Diallo, a former prime minister, and Alpha Conde, a veteran opposition figure, threw rocks at each other in the latest violent incident.

Many Guineans hope next week’s election will mark a turning point for a country that has known only authoritarian rule since gaining independence from France in 1958.

Brawls were also reported near Conde’s home in the neighbourhood of Mafanco, as well as near Conde’s Rally of the Guinean People (RPG) party headquarters in Hamdallaye.

Each party blamed the other for starting the battles.

Souleymane Diallo, a spokesman for the Union for the Democratic Forces of Guinea, or UFDG, said their female supporters were returning from a meeting when supporters of the opposing RPG began throwing rocks at them.

Witnesses told the Associated Press news agency that a brawl broke out.

“We were coming back from a meeting of pro-UFDG women, which had been held at the presidential palace, when a group of people started throwing rocks at us,” UFDG supporter Marietou Balde said.

“We started throwing rocks back at them, and it degenerated. People were injured.”

However, Morifing Kaba, a RPG supporter, said the first stones were thrown by partisans of the UFDG.

She said they were attacked by rock-throwers at the party’s headquarters, where supporters had gathered for a campaign event.

Ayo Johnson, an African affairs specialist based in London, said “everyone is trying to intimidate one another”.

“Intimidation is the name of the game currently … It would appear that everyone is trying to flex their muscles in the lead up to these crucial elections,” he told Al Jazeera.

Ben Sekou Sylla, the president of the National Independent Electoral Commission (Ceni), and another official were convicted of vote-tampering on Friday.

Cellou Dalein Diallo, the UFDG candidate, received 44 per cent of the ballots cast during the first round of voting in June.

On September 19, he faces off against Conde, a university professor who gained 18 per cent during the first voting cycle.

Tensions between the two are rooted in Guinea’s ethnic divide, which has always hovered below the surface of the country’s politics.

Diallo is a Peul, the country’s largest ethnic group, which has never had one of its own in power.

Last year, the Peul were targeted during an army-led massacre of opposition supporters inside the national soccer stadium.

Although Conde spent decades as an icon of the opposition, he is a Malinke – a group heavily represented in the army, as well as in the government. 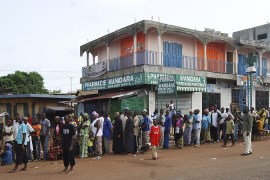