Turkey is holding a referendum on constitutional amendments proposed by the government of Recep Tayyip Erdogan.

The prime minister has said that the amendments will bring the old constitution closer in line with those of the European Union, which Turkey seeks to join.

Opposition parties argue that the changes will enable the government to exert more influence over the judiciary.

The current constitution is widely criticised for its apparently oppressive spirit. Among the 26 articles comprising the package are proposed changes in the way senior judges are selected.

The vote is expected to be a tight contest, and is seen as a crucial test for the governing AK Party in the run-up to a parliamentary election due by July 2011.

Al Jazeera spoke to several analysts to get their thoughts on the vote.

“Today is a critical day. It is the 30th anniversary of the 1980 military coup. And Turkey is finally getting rid of its constitution that was inspired by the military, the so-called 1982 constitution.

“We have amended this constitution 16 times and this one will be the seventeenth. And I think that we are headed in the right direction, that is, more power for the elected officials and less power for appointed officials and namely the military.

“Split and polarisation are ingredients of a democratic life. I think that Turkey is struggling for a better democracy and the polarisation they are talking about is not between Islamists and secularists; it is about the military interfering with the politics and the judiciary impeding the political life.

“There is no unity among the 26 articles unfortunately, and the referendum has turned into a referendum on the AKP [Erdogan’s party]. But this is how things happen in this country.

“Now we are heading towards an election next year and if the vote is a ‘yes’ vote, the hand of the government will be strengthened for a brand new constitution in Turkey.”

“There are really only two articles that are controversial. Even the opposition in the past has said it will endorse the remaining articles.

“These two articles are to do with the composition of the high judiciary. The government is basically trying to introduce a system where there can be more parliamentary and effectively government control over the judiciary.

“The hardcore secular camp in Turkey are objecting to this very severely because it believes that this will open a back door to an Islamic agenda for the government in the future.

“So, the lines are pretty well drawn here and they are not really discussing the merits of the article in questions. In fact, they are discussing ideological things.

“The stakes are high for both sides. In fact, we can say for three sides – the Kurdish side as well.

“They have called for a boycott in the southeast, the Kurdish region of Turkey. But opinion polls indicate that there might be a very high turnout and a very high ‘yes’ vote in the region which will be a great point for the government and a very bad point for the pro-PKK Kurdish party in Turkey as well as the PKK itself.

“Then there is, what I call, the post-modern civil war between the secularists and the ‘Islamists’ in this country.

“And that is why the debate, the campaigning, the canvassing, was very vitrolic before the referendum. But there is no indication that it is going to stop after the referendum, especially if it is a close result, say 49-51 [or] 50-50.

“Then the debate is just going to intensify in the lead-up to general elections next year. So we have got quite a lot of time before things cool down in Turkey.”

“There are two amendments that directly talk about judiciary, with an accusation that the judiciary had been too independent and made another coalition in the country and done many injuries to the political system. This is the allegation of the government.

“The minister of justice and his aides will be the chief of [the] council that will decide about the judges.”

“I would say that, yes, the judiciary has done many wrongs in the past, but with this new amendment it is quite possible that the government will directly be the leader and the owner of the judiciary.”

“The root of democracy, the separation of powers, will be completely voided.” 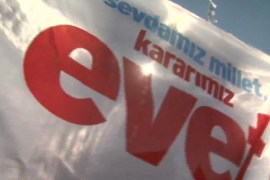 Turkey faces up to its past

One of the proposed constitutional amendments lifts immunity from prosecution that the military granted itself.