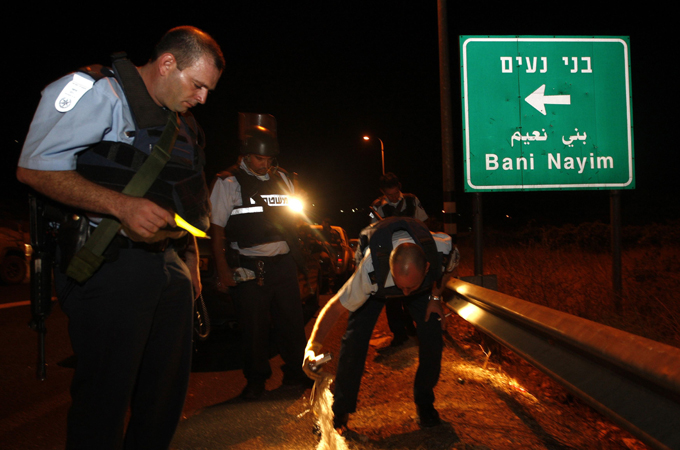 The military wing of Hamas has claimed responsibility for a shooting that killed four Israelis near Hebron in the occupied West Bank.

At least one gunman opened fire on a car driving on Highway 60 near the Kiryat Arba settlement on Tuesday.

The Qassam Brigades, the military wing of the Hamas movement, claimed responsibility for the attack in a short statement posted on its website, and said it would be the first in a “series of operations” in the West Bank.

Israseli rescue services said the victims were two men and two women, and that one of the women was pregnant.

This is the first fatal attack on Israelis in the West Bank since June, when one police officer was killed and two others wounded in an ambush. The Al-Aqsa Martyrs Brigades claimed responsibility for that attack.

The shooting comes one day before Palestinian and Israeli officials are scheduled to meet in Washington in an effort to relaunch direct negotiations.

Osama Hamdan, a Hamas spokesman, told Al Jazeera that Hamas had not planned any attacks intended to sabotage the Israeli-PA talks. But Hamdan said he was speaking for the political wing of Hamas, and that the Qassam Brigades could have planned the attack independently.

“We believe that there is no need to do something like this to sabotage these negotiations, because Netanyahu has [already] done this,” he said.

Salam Fayyad, the Palestinian Authority prime minister, condemned the shooting, saying it was “against Palestinian interests”. He said the PA will “take measures” to prevent future attacks.

Israeli officials have called security one of their top priorities for negotiations with the Palestinian Authority.

Binyamin Netanyahu, the Israeli prime minister, said that “the establishment of tangible security measures” was a precondition for talks with the PA.

Mahmoud Abbas, the Palestinian Authority president, acknowledged Israel’s security concerns in an address earlier this week, but said they could not be used as a pretext for a “land grab”. Kiryat Arba is built on land seized during the 1967 Arab-Israeli war, and is considered an illegal settlement by the United Nations.

Palestinian leaders committed to the peace process joined Israel and the United States in condemning Tuesday’s attack, saying direct Palestinian-Israeli negotiations which have been suspended for 20 months but due to resume this week, would not be derailed.

Hillary Clinton, the US secretary of state, commenting as she met Abbas and Netanyahu in Washington: “This kind of savage brutality has no place in any country under any circumstances.”

Abbas in condemning “any operation that targets civilians, Palestinians or Israelis”, said the incident was intended to “disrupt the political process”.

“The Palestinian president and the Palestinian leadership have condemned the attack that occurred near Hebron, in keeping with our principle of rejecting all attacks against civilians, whether they are Israelis or Palestinians,” a statement from Abbas’ office said.

“The goal of this attack claimed by Hamas is simply to disrupt the political process,” the statement added. “It cannot be considered an act of resistance.”

In a statement issued shortly after the shooting, Netanyahu said he directed Israeli security forces to “pursue the attackers without any diplomatic restraint”.

The Israeli leader vowed to seek punishment for those involved, saying: “We will not let the blood of Israeli civilians go unpunished. We will find the murderers, we will punish their dispatchers.”

“We will not let terror decide where Israelis live or the configuration of our final borders. These and other issues will be determined in negotiations for peace that we are conducting,” added Netanyahu.

Hanan Ashrawi, a member of the Palestinian Liberation Organisation’s executive committee, told Al Jazeera that the timing of the attack “is related to the beginning of talks”.

“There seems to be a pattern each time there is an advance [in the peace process] or the commencement of talks, attacks happen,” she said.

“The situation here is unstable, unsecure, and people pay attention when there is violence against Israelis, while the violence Palestinians face at the hands of Israelis on a daily basis goes unnoticed.”

PJ Crowley, a spokesman for the US state department, called for Israeli and Palestinian leaders to show “determination” and continue talks despite any violence.

“We are cognizant that there could be external events that can … have an impact on the environment,” he said at a press briefing in Washington.

“We are also cognizant that there may well be actors in the region who are deliberately making these kinds of attacks in order to sabotage the process.

“Not everyone sees this in the same way, and there are those who will do whatever they can to disrupt the process.”

The Israeli embassy in Washington issued a short statement in response to the attack. “[It was] clearly intended to derail the peace talks, but we will not be deterred from seeking peace,” it said.