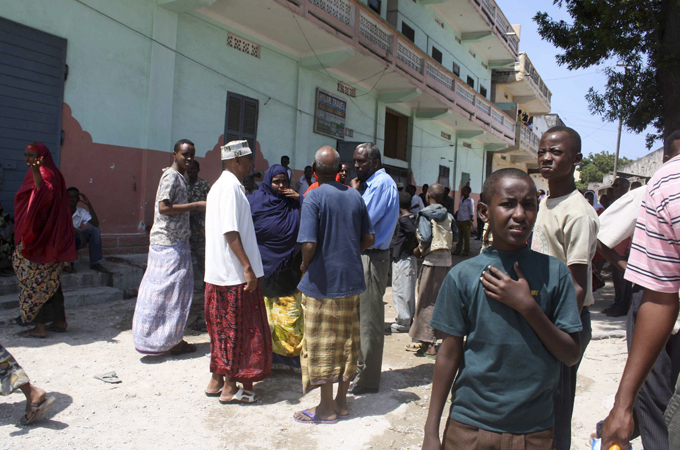 Four African Union (AU) peacekeepers have been killed in Mogadishu, the Somali capital, after al-Shabab fighters fired a mortar at the presidential palace.

“A mortar was fired at one of our positions, and it killed four soldiers and injured eight,” said Ba-Hoku Barigye, a spokesman for the peacekeeping force. Barigye said the dead soldiers are all Ugandan.

The AU pledged last month to expand the force, with both Guinea and Djibouti promising new troops.

Monday’s mortar attack was the latest bloody clash in a week of heavy fighting between al-Shabab and the peacekeepers.

At least six people were killed in several battles on Wednesday, and al-Shabab fighters killed nearly 40 people on Tuesday in a suicide bombing at a Mogadishu hotel.

Sharif Sheikh Ahmed, the Somali president, used the recent burst of fighting to appeal for more international aid for his embattled government, which controls just a few blocks of territory in Mogadishu.

“It is quite impractical to expect Somalia alone to contain the evil al-Qaeda [and] al-Shabab alliance, as Somalia is emerging from 20 years of destruction and a chaotic political environment,” he said in a statement.

Fighting between al-Shabab and government forces has also been seen in Mogadishu’s Hodan neighbourhood.

Six civilians were killed there over the weekend, when al-Shabab fighters attacked a government barracks. The TFG says it retook the area on Sunday.

“Our forces have regained control of a key position that was captured by the anti-peace forces for a day,” said Abdullahi Hassan Bariise, a spokesman for the Somali police.

A spokesman for al-Shabab, however, claimed that ten Somali troops were killed in fighting in Hodan.