Mexican officials have announced the arrest of a US-born suspected drug trafficker nicknamed “the Barbie” in a major victory for the government amid spiralling drug violence.

Edgar Valdez Villareal, a Mexican-American, who faces trafficking charges in the US, has been blamed for a vicious turf war that has included bodies hung from bridges and shootouts in central Mexico.

Federal police caught Villareal, the Texas-born leader of the Beltran Leyva gang based in central Mexico, in a house in a residential area on the edge of the state of Morelos, near Mexico City, a police spokesman told Reuters.

The spokesman said Villareal, one of the most sought after by authorities in both Mexico and the US, put up little resistance.

Monday’s announcement was confirmed by the attorney-general’s office, the interior and public security ministries and Felipe Calderon, the Mexican president, on Twitter.

The Public Safety department said in a statement the arrest was the culmination of a yearlong intelligence operation.

“He has been captured alive so this could bring a wealth of information to authorities about how the gangs operate and all of their current operations,” Sanchez said.

Villareal, 37, has been indicted in the US on charges he distributed thousands of kilogrammes of cocaine in the eastern US between 2004 and 2006.

US authorities have put up a $2m reward for information leading to Villareal’s arrest.

While the Mexican authorities hailed the arrest of Villareal a new victory in the war on drugs, critics say that this war bears a high cost.

Speaking to Al Jazeera, Colin Harding, a Latin America analyst, said: “Civilians are in the frontline most of the time.

The civilian population is not being protected by the federal authorities and there no is evidence at all that the flow of drugs into the US, which the different cartels has been battling about, is diminished at all.”

The capture of Villareal – the third major drug lord brought down by Mexico’s security forces in less than a year – comes on the heels of the killing by Mexican soldiers of another drug boss, Ignacio “Nacho” Coronel, in July.

The Beltran Leyva gang, one of many violent drug gangs operating in Mexico, was dealt a severe blow with the death of its head Arturo last December and then the arrest of his younger brother, Carlos.

The group broke off from the powerful Sinaloa drug trafficking organisation in 2008.

Despite the major arrests, Mexico’s drug gang violence has only grown bloodier since Calderon launched his crackdown in 2006, claiming more than 28,000 lives.

In the latest violence, a 12-hour battle left a soldier and six attackers dead in the eastern town of Panuco.

The armed men opened fire and launched grenades at a government power station as they tried to escape the soldiers, causing a power outage in a large part of town, Salvador Mikel Rivera, the attorney-general in the state of Veracruz, where Panuco is located, said.

Meanwhile, for the first time in its history, the border city of Ciudad Juarez cancelled its traditional September 15 celebration of Mexico’s Independence from Spain, Mayor Jose Reyes announced on Monday.

Reyes said authorities had not received any specific threat surrounding the event but decided it was too dangerous for large crowds to gather in the city.

Ciudad Juarez has become one of the world’s most dangerous cities amid a turf war between drug gangs.

The cancellation was especially a blow this year because Mexico is celebrating its bicentennial independence anniversary. 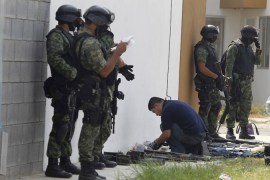 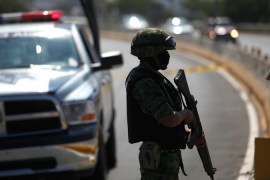 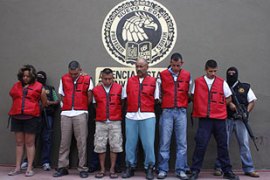 Six policemen, including house guard, among suspects in mayor’s kidnapping and killing. 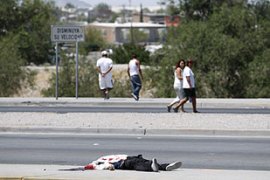