An AFP correspondent at the scene said the streets were covered in blood while several shops were badly damaged and multiple cars destroyed.

Haidar Habib, a currency trader, said he was “thrown to the floor of my shop from the force of the explosions. I saw women and children on the streets losing their blood.”

The attacks came a day after Barack Obama, the US president, pledged that  US forces will end their combat mission in Iraq as scheduled on August 31 despite a recent flare-up in violence.

Also on Tuesday, at least five police officers were shot dead at a checkpoint in the capital by suspected al-Qaeda fighters, according to an interior ministry
source.

The source said the assailants used weapons with silencers in the assault in Mansour district of west-central Baghdad.

“Around 5:30am [02:30 GMT], men with silencer pistols shot dead five policemen at a checkpoint in Mansour neighbourhood before planting the flag of the Islamic State of Iraq,” the source said.

The Islamic State of Iraq is an al-Qaeda affiliate.

In another incident last Thursday, armed men killed 16 soldiers in the north Baghdad
neighbourhood of Azamiyah and planted al-Qaeda’s flag nearby.

Those attacks were likely to raise concerns that armed groups are taking advantage of the enduring political vacuum nearly five months after Iraq’s parliamentary elections failed to produce a clear winner.

Politicians are still bickering over the formation of a new government, with the main hurdle being who should become the next prime minister.

Figures compiled by the ministries of health, interior and defence showed July to be the deadliest month in Iraq in two years, with 535 people being killed in violence.

Security has vastly improved in the country but armed groups still launch attacks, frequently targeting the Iraqi army and police. 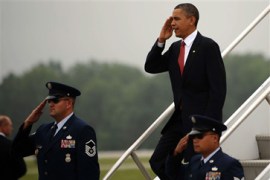 US president says all 90,000 combat troops will be removed from Iraq by September. 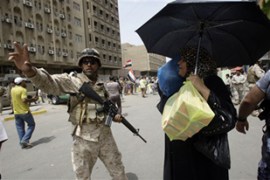