Indonesia has issued a red alert after the Sinabung volcano on the western island of Sumatra erupted for the first time in 400 years.

The volcano spewed smoke and ash 1,500 metres into the air, forcing the evacuation of thousands of people from the Karo district in North Sumatra on Sunday.

“Initially we thought the ash and smoke were triggered by rain but now we know the driving pressure was from magma,” Surono, the head of the nation’s volcano disaster alert centre, told the AFP news agency.

“It’s clearly dangerous so we’ve raised the warning to the highest level, or red level. From the crater, it shot smoke and volcanic ash 1,500 metres into the sky,” he added.

Most of the area surrounding Sinabung is agricultural, and farmers from up to 30km away have reported ash settling on their fields.

The 2,460-metre Sinabung, in northern Sumatra, has not erupted since the year 1600but had shown “some volcanic activity” since Friday, Surono, who goes by only one name, said.

One local resident was reported to have died following the eruption of Mount Sinabung.

Andi Arif, a member of the Presidential Special Staff for Natural Disaster, said on his Twitter social network account that he was informed by a resident of Cinta Rakyat village that Surbakti, a local resident, had died.

Andi said that Surbakti, who suffered from a breathing problem, died while being evacuated from his home to a safer location.

Later on Sunday, Sutrisno, a spokesman for Indonesia’s National Body for the Co-ordination of Disaster Management, said things had returned to “normal”.

“We got reports from the local authorities that the situation on the volcano is now back to normal,” Sutrisno told Al Jazeera.

“At the moment some people still remain in the evacuation area. Some 10,000 people were relocated; the local government is supplying the evacuees with basic needs.”

Indonesia sits on the Pacific “Ring of Fire”, where the meeting of continental platescauses high volcanic and seismic activity.

It has more active volcanoes than any other country.

Earlier this month, four people went missing after the 1,784-metre Mount Karangetang, on the remote island of Siau in North Sulawesi province, erupted.

Mount Baru Jari on Lombok island, near the resort island of Bali, erupted in May, spewing ash and lava at least 1,500 metres into the sky, damaging crops but not threatening villagers. 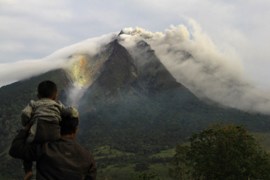