“We must all honour the memories of those we’ve lost – whether in the earthquake, or at any time – by responding peacefully and responsibly to this disappointment,” Jean said.

“I want to assure my countrymen that I will continue to work for Haiti’s renewal. Though the board has determined that I am not a resident of Haiti, home is where the heart is – and my heart has and will always be in Haiti.”

In a open letter released before the decision was announced, Jean, who moved to the United States when he was nine years old, said that whatever his fate the world needed to do more to help Haiti.

“We need the attention of a world that cares for humanity and the dignity of a race and culture,” he said.

Haiti was hit by a devastating earthquake on January 12 that killed at least 250,000 people and left 1.5 million homeless.

Jean said in the letter that he would ask each member of the Haitian diaspora, estimated to number more than one million people in the US and Canada alone, to contribute $10 to rebuilding their homeland.

The hip-hop star’s application to stand in the race had been criticised by those who questioned his political experience and accused a charity he runs of misusing donations.

He had no political organisation and only a vague platform, casting himself as an advocate of Haiti’s struggling youth and saying he will ask reconstruction donors to help the country’s dysfunctional education system.

However, Jean is hugely popular among Haiti’s youth and about 300 of his supporters marched in heavy rain outside the country’s electoral office in the capital Port-au-Prince on Thursday.

“We are here to defend a just cause – Wyclef Jean is a Haitian native, he is the candidate of the people, and we want him as our president. He should be in the electoral race,” one young demonstrator said.

Several Haitian youth organisations and Creole music groups had undertaken to support his national campaign as a candidate for the Viv Ansan-m party.

Al Jazeera’s Sebastian Walker, in Port-au-Prince, said: “After all the waiting in the end it was a very brief announcement made by a spokesman for the Hatian electoral council, who came out just over two hours before the deadline.

“Of those disqualified Wyclef has the widest following, especially among popular among young people.

“Earlier in the day there were demonstrations in the Haitian capital. And now, out on the streets of Port-au-Prince we’re hearing there is a very heavy police presence. We’ve heard that in at least one area of the city his supporters are burning tires.”

Haiti’s new president will be taking charge of the earthquake recovery, co-ordinating billions of aid dollars in a country with a history of political turmoil and corruption. 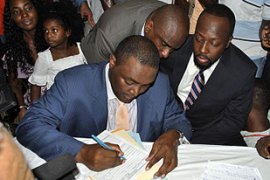 Hip-hop star ‘not in Haiti race’ 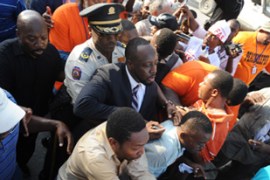 Electoral commission to rule of presidential bid by Wyclef Jean and others on Friday. 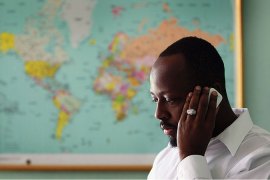 How qualified is the hip-hop star for the post and is he even eligible to run? 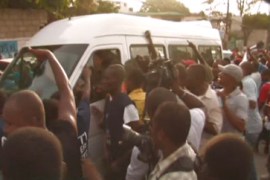 Many say country not ready for vote as candidates register for November election.