Abdul Rahaman is tall and thin. Before dawn this morning, he left his small two-bedroom home in the village of Zantoram in central Niger to look for work. He is prepared to do anything to earn a few coins, a few francs to feed his eight children.

Today, there was no work; not on the neighbouring farms or in the town. And so with some of the children in tow, he set off to the bush around the village to look for dinner.

They are trying to find roots and weeds that can be boiled. A cheap cereal called Gari is added to the mixture to create a meal which has little nutritional value, but fills empty stomachs.

Tomorrow, Abdul will work on his farm, not far from his house. There he will tend his crops and pray the rain will come in a way that it has not for the last two years.

For a man facing so many difficulties, he smiles readily and widely. He tries to describe every day life: “I am glad I have my health. Other things I don’t have, things that would make this a better life.

“I have tried to get work. If the crops fail this year, I will have to leave my family and go where perhaps I can earn some money to feed my family.

“So many families did not get a harvest last year. They perhaps got around 10kg of millet. That cannot feed a family for a whole year.”

His daughter Hawa wears the brightly coloured sequined head scarf which indicates she is now engaged to be married – “after the harvest,” she tells me.

She says she remembers many hard years but the last two have been the worst. “I have cried because I have been hungry and not knowing when we will eat again.”

I ask if she thinks help will come, if the aid appeals from international agencies and the Nigerien government will change her life. “I hope so but until now there is nothing that [the] government has brought for us,” she says.

In the local markets where snake charmers entertain for money and goats are transported on the top of buses, the failing harvests have pushed up prices. All the basics are around 10 per cent more expensive than last year. It makes feeding families harder.

Local speculators, aware the crops were going to fail, bought up the little that was around. They control supplies – maximising profit. It is simple supply and demand economics.

The traders get their spot after talking to Abdul Massa who runs the market. He knows prices have gone up.

“Last year a hundred kilo bag of millet cost 16,000 local francs (around $35), now it sells for 22,000. That is beyond many ordinary families. It is costing the traders more money to buy the grain – and they pass that cost onto the buyers. They have to make money too,” he says.

Mausa Egyharan has a face which carries the dignity of his position. The 80-year-old is a respected village elder, and people insist we should speak with him. He has never left this place and says he has never seen things so tough for so many people.

“People want to farm,” he says, “but they cannot because they are hungry and tired. It is difficult for them all. Tiredness cannot kill. You die when you die. We rely on God to help.”

In Zantoram, the people are locked in a vicious circle. They struggle to find the food which gives them energy to work to buy the food they need.

Abdul Rahaman’s family will not go to bed hungry. But tomorrow is another battle. 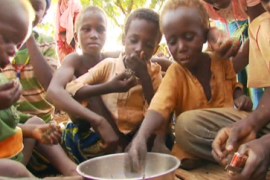 Many residents say government is not doing enough to feed millions of starving people. 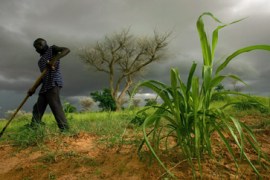 Hunger and hope in Niger

After two years of drought, rain has started to fall in Niger but it is too late for many. 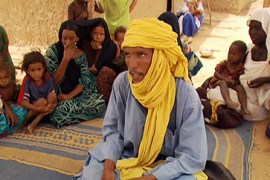 Hunger in Niger threatens more than half of the country’s population.