The findings of the study conducted by Human Rights Watch were based on interviews with more than 500 civilians, “including 90 former kidnap victims”.

Tom Porteous, the director of Human rights watch, told Al Jazeera that the LRA may be mounting this campaign of atrocities to replenish its ranks in order to return to Uganda.

However, he also added that “after so many years of fighting in the bush, another possibility is that LRA has simply become a self-sustaining monster without any strategic aim apart from to continue to survive”.

The report says that the group’s fighters “often attack villages early in the morning or late in the day, when residents are likely to be home”.

“LRA fighters grab their victims and tie them to each other by the waist, forming long human chains,” it said.

“The abductions are usually followed by the extensive looting of food, clothes, salt and other items, which are loaded into heavy bundles onto the captives’ heads, backs and shoulders before they are marched off into the forest.”

The LRA, headed by war crimes suspect Joseph Kony, gained a reputation for brutality as it waged an armed rebellion seeking to remove the government of Yoweri Museveni, the Ugandan president, and achieve its stated intention of ruling the country according to the Biblical ten commandments.

It also has a history of forcibly recruiting child soldiers, some as young as 10.

Of 45 children who had escaped the LRA and were interviewed by Human Rights Watch, almost all had been forced to kill other children.

“The LRA continues its horrific campaign to replenish its ranks by brutally tearing children from their villages and forcing them to fight,” Anneke Van Woudenberg, senior Africa researcher at Human Rights Watch, said.

That security void has allowed the LRA to perpetrate it is campaign of atrocities.

“What is needed now is for the UN and national governments in the region, with the support of Western governments if necessary, to step up civilian protection in this area because there are nearly enough UN and other forces to protect the civilians from the sort of atrocities which we have seen,” Porteous said.

In 2005, following a referral by the Ugandan government, the International Criminal Court (ICC) in The Hague indicted Kony, along with several of his senior commanders, for war crimes and crimes against humanity.

The warrants remain in force, but they have not yet been implemented by Uganda and other regional governments.

Porteous told Al Jazeera that “there need to be greater efforts to implement the arrest warrants of the International Criminal Court because the indications are that the orders for these campaigns are coming directly from the leader of the LRA Joseph Kony”. 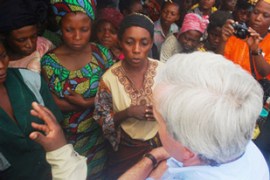 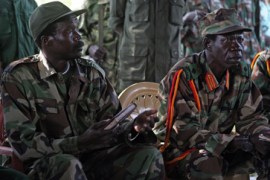