“A number of opposition parties had earlier stated their intention to stand, but faced either legal or administrative problems, which resulted in their non-participation,” the observers said in a statement.

“Each case appears to be different, but the overall impact is a concern.”

Three new parties set up to challenge his rule were barred from the contest on procedural grounds.

Kagame, who has overseen strong economic growth in Rwanda, defended the election in an interview with Al Jazeera.

“I am not responsible for the weak opposition, if the opposition is weak it is because they are weak. I can not be ashamed of my strength just because someone else is weak “.

When asked about the increased criticism about lack of democracy he said: “I don’t understand, did anybody follow the expressions of Rwandans, and how they came out freely to participate in the elections to choose, and to define the path to their future?”

Kagame also repeated government denials of any involvement in the killing of a journalist and an opposition figure in the run-up to the vote.

Tens of thousands of supporters started rejoicing at a giant rally in Kigali, Rwanda’s capital, after the first results started coming in early on Tuesday.

Speaking to reporters after voting, Kagame said the process was “very democratic” and dismissed allegations that the opposition was de facto excluded from the vote.

“The people of Rwanda were free to stand for election – those who wanted to – and to qualify, so I see no problem,” he said.

“Some sections of the media seem to be reading from a different page.”

“It’s not the manner in which the polling has been organised. The election results are decided months in advance of the polling by the way the opposition was treated, by the way dissent was clamped down on.”

Kagame, 52, has been the de facto leader of the central African nation since his rebel group-turned-political party, the Tutsi-dominated Rwandan Patriotic Front (RPF), routed Hutu extremists after the 1994 genocide.

Kagame won 95 per cent of the votes cast in the 2003 polls, the first since the
genocide, in which at least half a million people were slaughtered.

Despite being credited with ending the genocide, and ushering in stability and growth, critics say that Kagame’s success is just a facade for a repressive regime.

Human Rights Watch said “a worrying pattern of intimidation, harassment and other abuses” has emerged over a period of six months.

“The past few months have been marked by an increasing crackdown on the opposition,” Carina Tertsakian, a HRW researcher, told AFP from London.

“What’s important to remember is that none of the opposition parties have been able to present candidates, so voters don’t actually have much of a choice.” 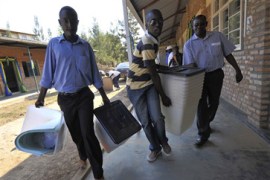 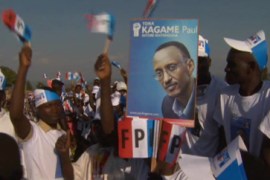 Country’s democracy questioned as opposition alleges harassment ahead of elections. 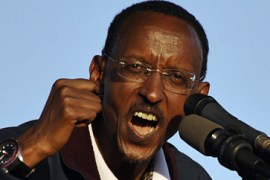