At least 1,117 people have already been confirmed dead in Gansun province, with that death toll expected to rise.

Troops continued to dig through the mud on Thursday in Zhouqo, the main town in the province, looking for some of the 627 people reported missing. But so far they have discovered few survivors.

“It’s densely packed earth and very, very unlikely that there will be any pockets of air anywhere,” Al Jazeera’s Melissa Chan, reporting from the town, said.

China’s state-run Xinhua news agency reported on Wednesday that soldiers had, however, managed to rescue one 50-year-old man who had been trapped on the second floor of a hotel.

At least three villages were levelled by an avalanche of mud and rocks triggered by heavy rains on Saturday. 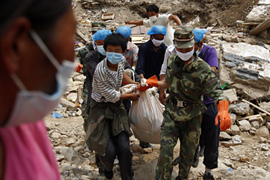 Rescue workers have found few survivors amidst the rubble [Reuters]

The mudslides flattened an area five kilometres long and 500 metres wide, Xinhua said, as floodwaters up to three stories high submerged half the city.

“In some households, all the people have died,” making the counting of the dead more difficult, Zhang Weixing, a ministry of civil affairs official, told a news conference on Wednesday.

Throughout the area, bodies were seen wrapped in blankets and tied to sticks or placed on planks and left on the streets to be picked up, according to witnesses.

Shen Si, a local resident, watched as troops dug to reach the bodies of her relatives inside their buried home.

“My mother and father in their 60s and my younger brother, all three of them, are buried here in our house still,” she told The Associated Press news agency.

Disinfectant crews sprayed chemicals across the ground amid fears of an outbreak of disease. Most local water sources have been destroyed or are too polluted to use, increasing the risk of typhoid and cholera epidemics.

State media reported numerous cases of dysentery but Zhang Guoxin, the deputy director of the health ministry’s emergency office, said there had been no reports of an epidemic outbreak.

At least 45,000 people have evacuated their homes, and the ministry of civil affairs reported the delivery of 30,000 tents to the area, with thousands more on the way.

“It is now a critical time … we must give the highest prominence to the protection of people’s lives and properties,” the ruling Communist Party’s Politburo Standing Committee said in a statement.

Before the Gansu mudslides, the government said more than 2,100 people were dead or missing nationwide in flood-related disasters this year. More than 12 million people have been evacuated from their homes in the worst flooding in a decade. 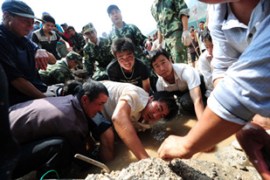 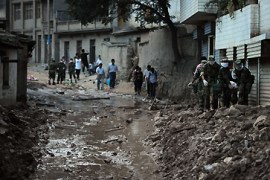 At least 337 people are dead as rescuers search for up to 1148 others still missing. 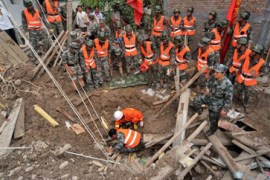 China bid to save landslide victims