That decision will pull millions of tonnes of wheat out of world markets: Russia had originally planned to increase its exports this year, to more than 40 million tonnes.

The World Bank has urged other nations not to follow suit, fearing a supply crunch like the one that drove 2008 prices to twice their current levels and prompted food riots in Africa and Asia.

At least one country is not listening, though. Severe winter frosts and a summer drought have damaged the crop in Ukraine, the world’s sixth-largest exporter, and Kiev is expected to impose its own export ban later this month.

In Australia, the government is forecasting a 22.1 million tonne crop, slightly larger than last year’s. But there are persistent fears that locusts could destroy two or three million tonnes; and western Australia is suffering from a drought, threatening much of the region’s crop.

Other countries have had smaller-scale problems: In northern Afghanistan, for example, a plague of locusts has already destroyed much of the wheat crop in Samangan province.

Argentina is one of the few global bright spots. The US agriculture department predicted on Tuesday that Argentina would export eight million tonnes of wheat over the next year, a one-million-tonne increase over preliminary estimates.

The supply fears have pushed up prices for wheat: Some wheat options on the Chicago Mercantile Exchange have already increased by more than 50 per cent since May.

Rising prices are an immediate problem in Pakistan, where weeks of flooding have destroyed millions of acres of farmland, much of it in the highly fertile Punjab province.

A Pakistani farmers association estimated that flooding has wiped out 500,000 tonnes of wheat, roughly 2 per cent of Pakistan’s annual harvest. The food ministry places the figure slightly higher, at 600,000 tonnes. Sugar and cotton crops will also suffer. 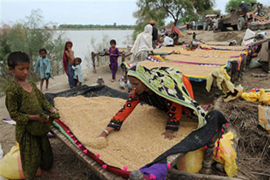 More than one million acres of Pakistani farmland are underwater [AFP]

Food prices normally spike in Pakistan during Ramadan, and the flooding has only added to the misery. Wheat flour is being sold for 560 rupees per one-kilo bag, well above the official price of 400 rupees.

The increases are only expected to worsen as vendors begin to exhaust their stockpiles.

Some goods are already unavailable: The Swat Valley’s peach and apricot harvests cannot be shipped to market because flooding has washed away roads and bridges.

Other countries fear longer-term implications from the global shortages.

The Russian export ban has prompted some concern in Egypt, which depends heavily on imported wheat to feed its 80 million people. The Egyptian government has asked the Russian government to honour its existing contracts.

It says it has enough wheat stockpiled to provide subsidised bread for the next four months, but it is also looking for other countries – like the US and France – to increase their exports.

In Australia, meanwhile, analysts have warned that fires in Russia and floods in Canada will make everything from coffee to eggs to beer more expensive.

Most commodity analysts say a return to the 2007-08 crisis is unlikely, because stockpiles – particularly of wheat – are at a much higher level.

The USDA report on Thursday also suggested that an unexpectedly strong production forecast for the United States would be expected to fill any global deficit.

Still, food markets tend to be irrational, and small-scale disruptions in supply can have a large impact on prices.

The Organisation for Economic Cooperation and Development and the Food and Agriculture Organisation warned in a June report that the food markets will remain subject to sharp fluctuations.

“If history is any guide, further episodes of strong price fluctuations in agricultural product prices cannot be ruled out nor can future short-lived crises,” they wrote.