Campaigners in the UK are making a last ditch attempt to stop the execution of a British woman on death row in the United States.

Linda Carty is due to be executed by lethal injection in Texas for the murder of a woman nine years ago.

Carty has always protested her innocence and campaigners say there were severe problems with the trial that convicted her. 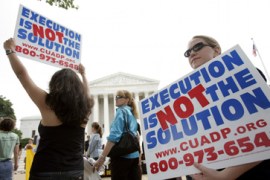