“We have been informed there are people who continue to try to spread false information to spur hatred and instigate unrest,” Ongart Klampaiboon, the minister to the prime minister’s office, told reporters.

The emergency decree will expire in five of the country’s 76 provinces, but in Bangkok and 18 others, mostly in the rural north where the bulk of the red shirt support comes from, it will be extended for another three months.

The govenment made its decision after the office set up to handle the crisis in the capital said it believed anti-government protesters would seek to stir up trouble if the measures were dropped.

“The CRES [Centre for the Resolution of the Emergency Situation] believe the situation remains volatile with attempts to distort information, to instigate the crowd in some areas,” Sansern Kaewkamnerd, the body’s spokesman, said.

“Some people involved in the violence are still on the run while others may attempt to operate underground.”

The International Crisis Group (IGC), a think-tank, voiced concern on Monday that the emergency laws had empowered authorities to stifle anti-government movements, including the red shirts.

“While the Red Shirts have no opportunity for open and peaceful expression because of draconian laws, their legitimate frustrations  are being forced underground and possibly towards illegal and  violent actions,” ICG said.

Human rights campaigners have voiced concerns that the government’s use of the sweeping emergency powers lacks transparency and violates freedom of expression.

Somyos Preuksakasemsuk, an anti-government activist briefly detained in May, said that the law was being maintained to prevent the red shirts from co-ordinating any future activity.

“As long as the decree is in place, we cannot regroup. It’s too risky even for a low-key provincial gathering,” he said.

A red shirt leader detained on charges of terrorism during the unrest earlier this year is running in the Bangkok by-election as a candidate for the opposition Puea Thai Party.

The red shirts had been demanding that the prime minister resign and call fresh elections, but their protests were ended when Thai security forces moved on their positions in Bangkok on May 19. 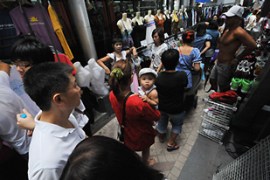 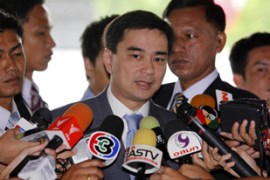 Abhisit blames militia for sparking clashes ahead of censure debate in parliament.