“The people here who came … were a mix of men and women, they were old and young, and there were high-level delegations that came from across the Arab world,” she said.

The funeral procession first headed to Imam Rida Mosque in the nearby neighbourhood of Bir el-Abed, where Fadlallah used to give his lectures and sermons in the 1980s.

It then marched to a nearby spot where Fadlallah escaped a 1985 assassination attempt – an explosives truck that left 80 people dead – that was widely believed to have been the work of the CIA.

The Iraqi-born Shia cleric, aged 75, died in a Beirut hospital on Sundayafter being admitted in June for internal bleeding.

Fadlallah was born in 1935 in Najaf, the centre of Shia scholarship in Iraq.

He spent more than two decades studying Islam there before moving to Lebanon, where he spent most of his adult life.

He attained the status of marja, or “source of emulation”, the highest level of authority amongst Shia clerics.

Fadlallah had a wide following, not just in Lebanon but among Shia Muslim communities in the Gulf and Central Asia.

Many of his sermons, widely distributed on audiotapes in Lebanon the 1980s, helped to spark increased political awareness among Lebanon’s Shia Muslim population.

Fadlallah was often described as the “spiritual guide” of Hezbollah, the Shia Lebanese political movement. However, he never held a role within the organisation.

He did support some of its actions, endorsing suicide attacks against Israel and issuing a ruling in 2009 that forbade normalised relations with the Jewish state.

Speaking on the sidelines of Tuesday’s funeral, Ibrahim Mousawi, a spokesman for Hezbollah, told Al Jazeera the cleric’s death was a “great loss”.

“We’re talking about a great loss, actually, not just to Hezbollah but … to the Islamic community, and to the Arab world. He has always spread the message of tolerance, of opennness, of transparency, [and] of dialogue,” Mousawi said.

He said Fadlallah was important as a “spiritual guide” for the Shia organisation.

Fadlallah was branded a terrorist by the US, and named on a 1995 blacklist.

Despite endorsements of some of Hezbollah’s activities, he condemned other suicide attacks that targeted civilians, like the Moscow subway bombings earlier this year. 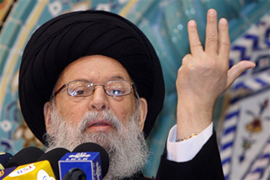 He was also critical of the September 11, 2001 attacks on the US, saying they were “not compatible with sharia law”.

Fadlallah was a staunch critic of US foreign policy in the Middle East, accusing it of bias in favour of Israel.

“I have not found in the whole long history of the Arab-Israeli conflict even one neutral American position,” Fadlallah said in a 2009 interview with the Wall Street Journal.

He wrote a letter last year to Barack Obama, the US president, in which he accused US policies of contributing to “the loss of the Palestinian cause”.

While the West criticised him for his politics, conservative Islamic scholars often condemned Fadlallah for his moderate views.

Fadlallah was widely known for his views on women, describing men and women as equals, and issuing a ruling in 2007 which encouraged women to defend themselves against violence.

His extensive charitable works added to his popularity.

Fadlallah established a network of schools and orphanages in Shia suburbs of Beirut and in southern Lebanon.

After news of his death broke on Sunday, thousands of Fadlallah’s followers gathered outside the Hassanein mosque.