Nawaz Sharif, leader of the Pakistan Muslim League-N (PML-N), called on Saturday for the government to negotiate with the Pakistani Taliban “who are ready to talk and ready to listen”.

The agreement to hold a national conference represents a rare moment of
consensus between the two parties, which have clashed over how to address the
problem of growing violence in Punjab, the country’s most populous and richest region.

Officials in the ruling Pakistan People’s Party have called on Punjab’s PML-N government to crack down on fighters, once supported by the country’s intelligence agencies but now allied with the Pakistani Taliban against the state.

The developments come against the backdrop of a peace conference, or jirga, over the issue of fighters in the tribal region of South Warizistan, on the border with Afghanistan.

According to Dawn News, a private TV station, the jirga failed to reach a consensus.

The government has brokered peace deals with Pakistani Taliban fighters along the Afghan border in the past, but they have usually collapsed and often given the fighters time to regroup and consolidate their control.

On their part, the fighters have continued their campaign of attacks in the country’s northwest near the Afghan border.

There was no immediate claim of responsibility for the attack, but suspicion fell on the Pakistani Taliban.

Groups linked to al-Qaeda and the Pakistani Taliban have launched a wave of attacks across the nation in apparent revenge for the military offensives in their bastions in the northwest of the country near the Afghan border.

Ties between armed groups in Punjab, the Taliban and al-Qaeda are especially worrying for the Pakistan government, which has said the military is stretched in campaigns in the northwest.

While most of the reprisal attacks have taken place there, fighters have also stepped up operations in the country’s heartland, mainly Punjab, in recent months. 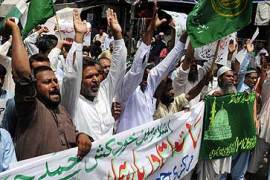 Protesters condemn failure to crack down on attackers as Lahore bomb toll touches 42. 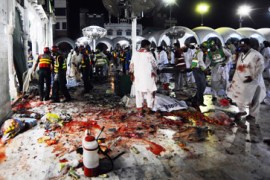 At least 42 dead and 180 injured in pair of suicide attacks in Pakistani city. 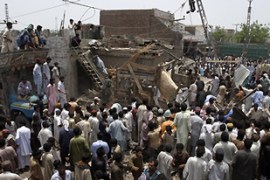 Many dead in Pakistan lorry blast

At least 18 people killed in an accidental explosion in southern city of Hyderabad. 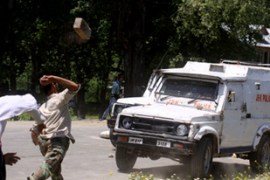