China is bracing for its second powerful storm in less than a week, as the death toll from floods and landslides across the country climbed to nearly 300 this month.

Tropical storm Chanthu is expected to make landfall in Guangdong and Hainan provinces on Thursday, and it may pick up force while over the South China Sea.

Much of southern and central China has been suffering flooding and landslides after weeks of torrential downpours and the deluge is spreading north, with Liaoyuan city in northeastern Jilin under waters 1m deep on Wednesday, state television reported.

Flooding is common in southern China during the annual rainy season, but this year has been the worst in decades in some areas.

At least 273 people have died as a result of the rains this month, bringing to 701 the number killed so far this year.

Another 347 are missing, the government said on Wednesday.

This year’s death toll is the worst since 1998, when the highest water levels in five decades claimed 4,150 lives.

Already, three-quarters of China’s provinces have been plagued by flooding and 25 rivers have seen record-high water levels, officials said.

Flooding, particularly along the Yangtze river basin, has overwhelmed reservoirs, swamped towns and cities, destroyed farms, and caused landslides that have smothered communities, including toppling 645,000 houses.

The government estimates that the rains have caused direct economic damage of $21bn.

Qinghui Gu from the International Federation of the Red Cross in Hubei province, told Al Jazeera they were concerned about the availability of food, water and shelter for the next few months.

“There are over 300,000 people being evacuated from this area alone,” Gu said.

“A lot of farmland has been flooded and completely destroyed. More rain is expected and a lot of small reservoirs have burst.”

With the typhoon season only just starting – six to eight typhoons are expected this year – and another bout of heavy rain forecast in the Yangtze region for Thursday, there are fears of another mass disaster on the scale of 1998.

But Liu Ning, general secretary of the government’s flood prevention agency, said that should not happen.

He said the country was far better prepared than in 1998 and the overall water volume was not as high this time, although some rivers had risen above the peak of that year.

Since 1998, dykes have been improved and the massive Three Gorges dam completed.

Only a few dykes have failed this year, unlike in 1998 when thousands did, Liu told a news conference.

But he warned that since 60 to 80 per cent of the annual rainfall occurs between June and August, the authorities should ramp up preparations and “be prepared to prevent and combat potential disasters”.

The Three Gorges dam was given the go-ahead by the government in 1992, against unusually visible and vocal domestic opposition – with environmentalists warning the reservoir could turn into a cesspool of raw sewage and industrial chemicals trapped behind the dam.

The $50bn project has already displaced millions as their homes were covered by the damming of the river. Millions more are expected to have to move within the next decade.

The government justified its decision to push ahead by citing massive clean power generation and flood control.

The Three Gorges Dam faced its highest levels ever this week and water breached the 2km long and 200m high dam.

But Liu said although water levels in the upper stretches of the Yangtze had surpassed 1998 marks, “the flood situation is still not as severe because the Three Gorges Dam has played a key role in preventing floods along the river this year”. 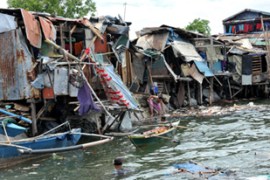 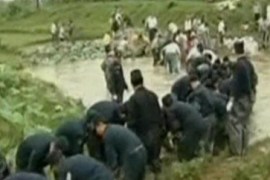 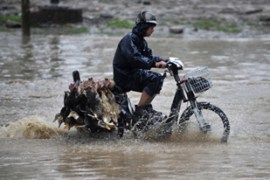 Landslides contribute to rising toll, with 29 million affected in southern and central regions. 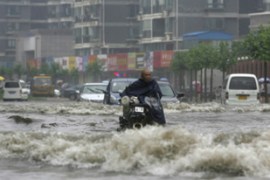 At least 107 dead in central and southern China in floods triggered by heavy rains.