According to the rebel group, Yemen’s army supports the tribal fighters, but Ali Abdullah Saleh, the president, blamed the clashes on zealous supporters from each side.

The Houthi rebels on Monday stated their support for a recent agreement signed between the country’s ruling party and the opposition, aimed at creating a national dialogue between Yemen’s political rivals.

The group said that the agreement, sealed between the ruling General People’s Congress and a coalition of opposition parties, will pave the way for a “comprehensive dialogue which excludes no one”.

It is said to be aimed at finding ways of implementing a February 2009 deal for national dialogue and postponing a parliamentary election until April 2011 to allow time to amend Yemen’s constitution.

On Tuesday, the Houthis also voiced support for an offer by Qatar to help consolidate the truce between them and the Sanaa government.

“We welcome Qatar’s initiative in promoting sustainable peace and… we have informed Qatar’s emir of our welcome,” Mohammed Abdul Salam, a spokesman for the Houthis rebels, told AFP news agency.

During a visit to Sanaa last week, Sheikh Hamad bin Khalifa al-Thani told reporters his country was ready to help safeguard unity in Yemen, which is racked by tensions in the north and in the south.

“We would be happy to take part in finding a solution that helps the survival of the Yemen unity,” he said after talks with Ali Abdullah Saleh.

“We are always with the Yemenis in their problems, unless they refuse that. Until now, they have not refused.”

Qatar has been previously involved in the past in talks between the government and Houthi rebels.

Thousands of people have been killed in the conflict which first  broke out in 2004, with the last battle ending in a February truce.

There are also tensions in the south where the Southern  Movement, a coalition of opposition groups, has a range of demands from economic and social improvements to full independence for the regions of former South Yemen. 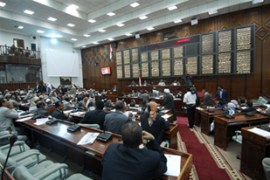 Rebels express support for government-backed accord between political rivals. 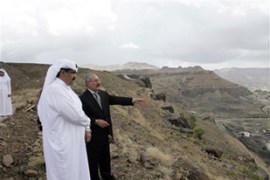 Tension remains high as rebels warn of a ‘military buildup’ in northern Yemen.