Since a 75-tonne cap was placed over the well to keep the oil bottled up inside, BP and government engineers have been watching closely to see whether the well would hold tight or show signs of rupturing under the pressure.

A rupture could cause a bigger and harder-to-control disaster.

Allen had on Sunday instructed BP to submit a plan for reopening the well to allow oil to flow into the ocean again after engineers detected seepage on the ocean floor and “undetermined anomalies” near the well.

But on Tuesday Allen told a news briefing in Washington DC: “We’ve found nothing that would be consequential toward the integrity of the wellhead to date.”

He added that five leaks in and around the broken BP well were more like “very small drips – not unlike an oil leak you might have in your car”, and did not mean the well was unstable.

So he continued granting BP 24-hour extensions to keep the cap in place, as long as the company monitors the well closely.

Allen also said BP and government scientists were in talks about bolstering a relief well’s role in intercepting and killing the leak with a “static kill” – an effort to pump heavy drilling mud and cement into the blown-out well from the top as well as through the relief well at the bottom.

With the leak already capped since last Thursday, Allen said that “we could probably overcome the hydrocarbons that are in there”.

He also said officials were closely watching a weather system near Puerto Rico that could strengthen into a tropical depression and possibly interfere with operations at the spill site.

Before the cap was placed, nearly 10 million litres of oil was spewing into the Gulf every day for nearly three months since the Deepwater Horizon rig exploded and sank in late April, according to the US government’s worst case projections.

BP was able to siphon some of that oil to ships on the surface but was not able to shut off the flow until fitting the cap on Thursday.

Meanwhile, the energy giant said on Monday that the cost of dealing with the spill had reached nearly $4bn.

The company said it has paid $207m to settle individual claims for damages from the spill along the southern coast of the US. 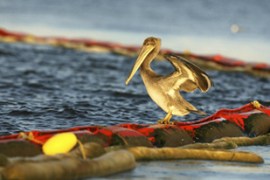