It is “aimed at further straining the already deadlocked inter-Korean relations and igniting a nuclear war against the DPRK [North Korea], while watching for a chance,” Minju Joson, North Korea’s cabinet newspaper, said in a commentary.

South Korea and an international team of investigators have blamed North Korea for sending a submarine to torpedo the Cheonan frigate near their disputed Yellow Sea border.

The sinking was considered South Korea’s worst military disaster since the Korean War, which ended in a cease-fire in 1953.

No formal peace treaty was ever signed, and more than 28,000 US troops remain stationed in the South with a pledge to protect its ally.

The North continues to deny involvement in the sinking and says that it was vindicated by a United Nations Security Council statement on July 9 which condemned the attack without specifying the culprit.

Analysts have said the deployment of the George Washington, one of the world’s largest warships, could be seen by North Korea as an aggressive move by the US due to the ship’s sheer size and potential firepower.

According to a Navy website, the giant nuclear-powered ship can accommodate some 6,250 crew members and carries dozens of aircraft.

Despite China, North Korea’s main ally, expressing opposition to the war games, South Korea has said the exercises will go ahead although defence officials have said the drill will be partially relocated from the sensitive Yellow Sea to the Sea of Japan.

Gates said the South Korean and US militaries would practise anti-submarine drills as well as aircraft operations.

He said Wednesday’s visit to the DMZ was designed “to highlight how important operations are there to the security of the peninsula as well as to the region, and demonstrate our steadfast commitment to the Republic of Korea [South Korea]”.

More details of the drill, the first in a series, were expected to be announced later on Tuesday after Gates meets South Korean defence minister Kim Tae-young. 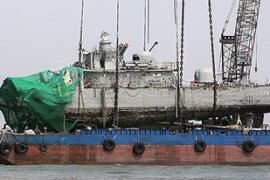 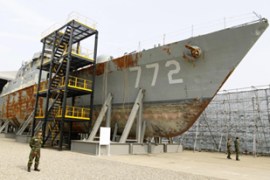