“At this point there is not any reason to believe that we have anything that’s a major issue in relation to the well’s integrity from the seepages we’ve located.”

More than three days since BP started using a new, tighter fitting cap to stop the oil from gushing out of the well 1.6km below the surface, the British energy giant said the cap was holding.

“The fear is that at some point the pressure inside the that cap will blow a large hole in it, or damage it irretrievably, and at all events, that has to be avoided,” Richard Miller, former geologist of BP told Al Jazeera.

“If you lose control of that well-head, then I am afraid you have nothing left upon which you can attach any further containment device,” Miller said.

Earlier on Sunday, BP officials had expressed hope that the test of the cap which began Thursday could continue until a relief well being drilled reaches the damaged well and heavy drilling mud and cement is used to seal it more permanently.

Doug Suttles, BP’s chief operating officer, told reporters that reopening the well would release oil into the Gulf for up to three days even though capture vessels were standing by on the surface to begin processing oil within hours.

“We’re hopeful that if the encouraging signs continue that we’ll be able to continue the integrity test all the way to the point that we get the well killed,” he told reporters before Allen issued his statement.

“Clearly we don’t want to reanimate flow into the Gulf if we don’t have to.”

Before the cap was placed, nearly 10 million litres of oil was spewing into the Gulf every day for nearly three months since the Deepwater Horizon rig exploded and sank in late April, according to the US government’s worst case projections.

BP was able to siphon some of that oil to ships on the surface but was not able to shut off the flow until fitting the cap on Thursday.

The company said it has paid $207m to settle individual claims for damages from the spill along the southern coast of the United States. 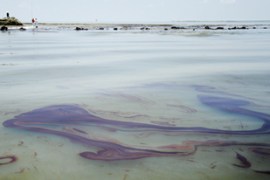 Oil giant hopeful that leak has been stemmed, but tests being extended to allay concerns.