Last week, the court suspended his trial and criticised the chief prosecutor for abusing court processes and ignoring the judges’ orders.

Moreno-Ocampo remained adamant on Friday that he would not release the name of an intermediary to Lubanga’s defence team until security concerns were addressed.

“The prosecution prefers to lose the case rather than to threaten the life of a person,” Moreno-Ocampo said.

He said he would release the name “as soon as protection is in place”.

Lubanga is accused of enlisting and conscripting children younger than 15 for his Union of Congolese Patriots, to kill members of a rival tribe in the 1998-2003 war in the Democratic Republic of Congo.

He has pleaded not guilty and described himself as a politician, not a warlord.

The ICC is also trying other accused Congolese warlords for crimes committed during the fighting in the giant, resource-rich African country.

His defence has argued that the child soldiers who testified against him made up their stories. 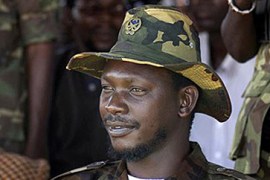 Leader of Congolese group goes on trial for war crimes.

Congolese militia leader to face war crimes charges in The Hague in January.