Al Jazeera’s Neave Barker, reporting from Domodedovo airport, said: “We gather that onboard the flight … there were at least two children.

“We’ve been told that they are likely to enter schools here, that they will be educated accordingly.

“Some, if not all of the ten, will be given apartments and regular incomes as well.”

John Rodriguez, the lawyer of Vicky Pelaez, one of the 10 agents, said the Russian government had promised her $2,000 a month for life, housing and documents to allow her children to visit Russia and have all their expenses paid.

Barack Obama, the US president, who met his Russian counterpart, Dmitry Medvedev, said after talks between the two leaders last month that they had “succeeded in resetting” the sometimes difficult relationship between the two countries.

Speaking to Al Jazeera about the spy swap, Christopher Walker, a Russia specialist, said: “I think it shows very, very positively that they are both determined that this reset button wont be disturbed.

Walker said the speed of the deal was “amazing”.

“In the old days it used to take months, even years sometimes, and there were trials, and there were people going across bridges, under foggy nights … this was virtually a spy swap in Vienna airport … for peaktime television.”

The operation in Vienna was the biggest exchange of spies since the end of the Cold War.

Special Russian and US flights which had taken the spies to the Austrian capital took off within 15 minutes of each other.

The main doors to the two planes were hidden from media gathered at the airport hoping for a sight of those involved.

Nick Spicer, Al Jazeera’s correspondent in Washington, said: “We now know that … this was negotiated by the CIA chief and his SVR [foreign intelligence service] counterpart, that is why there was no information, this was so hush, hush.

“They orchestrated a very well choreographed handover in which they set off a plane from the United States, and sent one off from Moscow precisely so that they would arrive pretty much within minutes of each other … at Vienna airport.”

Vienna, near the old Iron Curtain frontier, was a traditional venue for espionage rivalry between the two superpowers.

The Russian foreign ministry confirmed that the exchange involved the “return to Russia of 10 Russian citizens accused in the United States, along with the simultaneous transfer to the United States of  four individuals previously condemned in Russia”.

Before their deportation, the Russian agents, many of them speaking in heavy Russian accents despite having spent years posing as US citizens, pleaded guilty to conspiracy in a Manhattan, New York, courtroom on Thursday.

They were sentenced to time served and ordered out of the country.

In Russia, the Kremlin said Medvedev had signed a decree pardoning four convicted foreign spies so they could be exchanged for the 10 convicted in the US.

Among those pardoned, according to the Kremlin statement carried by Russian news agencies, was Igor Sutyagin, an arms-control expert sentenced to 14 years in prison in 2004 for spying for the US.

Natalia Timakova, Medvedev’s spokeswoman, said in the statement that together with Sutyagin, Alexander Zaporozhsky, Gennady Vasilenko, Sergei Skripal – all Russian citizens – had been pardoned after admitting their guilt and submitting a plea for pardon.

Sutyagin has insisted on his innocence, saying that the information he provided to a British company that investigators said was a CIA cover, came from open sources.

His family said this week that Sutyagin said he was forced to sign a confession, although he insisted he was not guilty and does not want to leave Russia.

Skripal, a former colonel in the Russian military intelligence, was found guilty of passing state secrets to Britain and sentenced to 13 years in prison in 2006.

He was accused of revealing the names of several dozen Russian agents working in Europe.

Zaporozhsky, a former colonel in the SVR, quit the service in 1997 and settled in the US, but Russia enticed him back and arrested him in 2001.

He was sentenced in 2003 to 18 years in prison for spying for the US, convicted on charges of passing secret information about Russian agents working under cover in the US and about American sources working for Russian intelligence.

The US justice department said in a letter on Thursday that some of the four prisoners were in poor health and had served lengthy prison terms.

Rahm Emanuel, the White House chief of staff, told broadcaster PBS that Barack Obama, the US president, was aware of the investigation, the decision to go forward with the arrests and the spy swap with Russia.

Eric Holder, the US attorney-general, said the “extraordinary” case took years of work, “and the agreement we reached today provides a successful resolution for the United States and its interests”.

The 10 Russian agents, captured last month in suburban homes across the US, were accused of embedding themselves in ordinary American life for more than a decade while leading double lives complete with false passports, secret code words, fake names, invisible ink and encrypted radio.

The 10 pleaded guilty to conspiracy to act as an unregistered agent of a foreign country and were ordered to be deported.

Asked to describe their crimes in court on Thursday, each of the 10 acknowledged having worked for Russia secretly, sometimes under an assumed identity, without registering as a foreign agent.

An 11th defendant has been a fugitive since fleeing authorities in Cyprus following his release on bail. 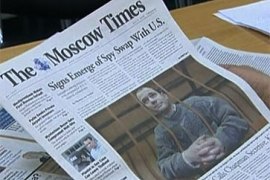 US and Russia agree to spy swap

Ten Russian agents to be swapped for four held in Russia. 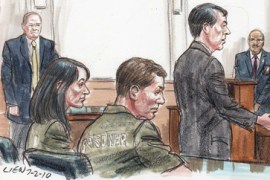 Scientist held in Russia could be exchanged for one of 10 suspects in US, lawyer says. 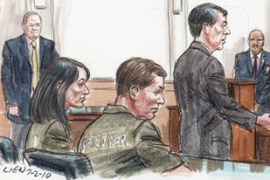 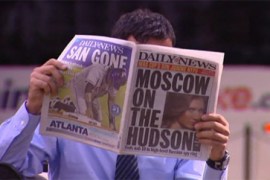 Questions asked over what exactly the alleged US spy ring managed to achieve.