The son of democracy icons Corazon and Benigno “Ninoy” Aquino, the 50-year-old Aquino tapped into the huge well of public support for his parents, who are considered heroes for their role in ending the 20-year dictatorship of Ferdinand Marcos.

His father, “Ninoy”, was shot dead in 1983 as he returned from exile to lead the pro-democracy movement and his mother, Corazon, led a “people power” revolution against Marcos three year later, before serving as president.

She died last year, unleashing an outpouring of support for the family that persuaded Aquino to run for president.

Aquino, an economics graduate and former congressman and senator, has said that fighting corruption, improving the economy and bridging the enormous wealth divide will be among his top priorities.

But his Liberal party could be hindered in its efforts to implement reforms after its choice for the vice-presidency, Mar Roxas, lost.

Estrada’s running mate, Jejomar Binay, won that contest and could potentially be a destabilising force for Aquino.

But Binay said on Wednesday that he was “a team player”.

“I am willing to work with the president, whatever is asked of me,” he told the AFP news agency.

Aquino’s party will also not have a majority in either house of parliament.

Instead, Arroyo’s Lakas Kampi CMD coalition will remain powerful in parliament, and the outgoing president, who won a seat in the lower house in the May 10 elections, could lead opposition against Aquino, especially over his pledge to investigate corruption allegations against her.

“The problems I will be inheriting are still growing to this very day and, perhaps, to the last day,” Aquino said on Monday.

He said his administration would have to produce results in the first two years to meet the public’s high expectations.

Already on Tuesday, two groups of peasants and slum dwellers rallied in front of Aquino’s suburban home, demanding he carry out land-ownership overhaul, including redistribution of his family-owned sugar estate, one of the country’s largest. 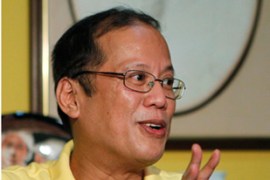 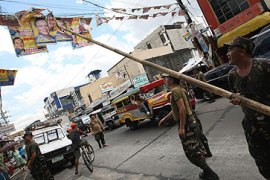 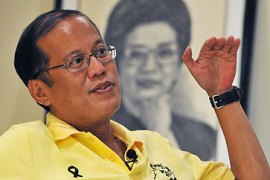 Philippines goes back to the future

Benigno Aquino III has won the election partly on the strength of his parents’ reputation. 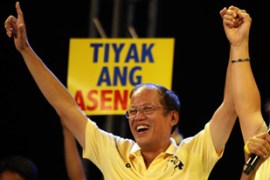