As their funerals got underway on Thursday, thousands poured onto the streets around the Fatih Mosque in Istanbul, chanting slogans condemning Israel and waving Turkish and Palestinian flags.

Turkish media estimated the size of the crowd as between 15,000 and 20,000 people, a reflection of the depth of anger in Turkey over the Israeli assault on the ships.

Several imams directed the mourners in prayer as eight of the coffins, draped in Turkish and Palestinian flags, were laid on marble stands for people to pay their respects.

The demonstration came as Turkish forensic experts confirmed that the nine activists had been shot dead.

Al Jazeera’s Jamal Elshayyal, who reported from the ship during the raid, confirmed that live ammunition had been used by Israeli commandos as they stormed the ship.

He said that he witnessed some of the killings, and confirmed that at least “one person was shot through the top of the head from [the helicopter] above.”

Elshayyal was on the top deck when the ship was attacked and said that within a few minutes of seeing the Israeli helicopters, there were shots being fired from above.

“Live shots came five minutes after that. There was definitely live fire from the air and from the sea as well.”

He confirmed that some passengers took apart some of the ship’s railings to defend themselves as they saw the Israeli soldiers approaching.

“After the shooting and the first deaths, people put up white flags and signs in English and Hebrew,” he said.

“An Israeli [on the ship] asked the soldiers to take away the injured, but they did not and the injured died on the ship.”

Earlier on Thursday, three air ambulances landed at a military base in Ankara, the Turkish capital, carrying wounded activists who were transferred from Israeli custody to hospitals in the city.

Hundreds of supporters, including Bulent Arinc, Turkey’s deputy prime minister, and several other Turkish politicians, gathered at the airport in Istanbul to welcome the returning activists.

“They faced barbarism and oppression but returned with pride,” Arinc told hundreds of jubilant relatives and supporters outside the airport, chanting “God is Great!”

Almost all of the detained passengers on board the flotilla have now been released.

Seven activists wounded in Monday’s clashes were still being treated in an Israeli hospital, the Israeli foreign ministry said.

Three others – an Irishman and two women from Australia and Italy – remained in Israel “for technical reasons”, the ministry said.

Our correspondent said that Raed Salah, a leader of the Islamic Movement in Israel, was one of those still being held.

Israel has remained defiant over the raid, rejecting calls for an international investigation into the incident, and warning it is ready to intercept another aid ship, the Rachel Corrie, that is due to head for Gaza next week.

Accusing international critics of “hypocrisy,” Binyamin Netanyahu, the Israeli prime minister, defended the seizure of the aid ships on Wednesday.

“This was not the Love Boat,” he said in a televised address to the nation, referring to the vessel boarded by commandos. “It was a hate boat.”

Netanyahu said the aim of the flotilla was to break the blockade of Gaza, not to bring aid.

He said that if the blockade ended, ships would bring in thousands of missiles from Iran to be aimed at Israel and beyond, creating what he said would be an Iranian port on the Mediterranean.

“The same countries that are criticising us today should know that they would be targeted tomorrow,” Netanyahu said.

However, Ban Ki-moon, the UN secretary-general, said the flotilla tragedy only highlights the serious underlying problem – namely, the siege imposed on the Gaza.

He said that the siege was “counter-productive, unsustainable and wrong”.

“It punishes innocent civilians,” he said, calling for the siege to be lifted immediately. 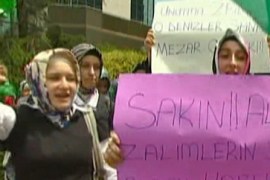 Anger in Turkey over Israeli raid

Turks take to the streets as activists deported from Israel return home. 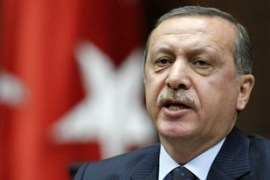 Prime minister says Israel should be “punished” for deadly attack on Gaza convoy. 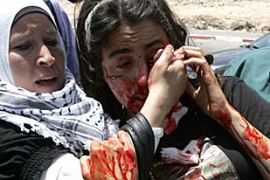 Thousands of people march in Istanbul and around the world over raid on Gaza convoy.