Their goal was to draw attention to Gilad Shalit, the Israeli soldier captured by Hamas four years ago as he was enforcing Israel’s occupation and blockade of the Gaza Strip.

Malcolm Hoenlein, the executive vice chairman of the Conference of Presidents of Major American Jewish Organizations, the Zionist umbrella group that organised the event, complained that the International Committee of the Red Cross (ICRC) has been prevented from visiting Shalit, while Israel allegedly allows “some 15,000 to 18,000 tonnes of humanitarian aid” into the besieged Gaza Strip each week.

Shalit has been deprived of his “most basic rights, including visits by representatives of international organisations” such as the ICRC, and the right to receive packages or letters from home, Asaf Shariv, Israel’s consul-general, echoed.

Following the outrage over Israel’s killing of activists aboard the Gaza Freedom Flotilla in international waters on May 31, the intensified focus on Shalit is Israel’s bid to deflect criticism of its unrelenting imprisonment of more than 1.5 million people in the Gaza Strip, half of whom are children who, unlike Shalit, remain anonymous to world media and leaders.

But does Israel have a point? Is Hamas violating Shalit’s most basic rights by denying the ICRC direct access to him, by refusing family contact, and even by keeping him captive in the first place?

In a recent interview, Béatrice Mégevand-Roggo, the ICRC’s head of operations for the Middle East stated that her organisation was working with “intensity” to secure permission for an ICRC representative to visit Shalit or at least for his family to exchange correspondence with him.

“Hamas has so far firmly rejected all of our pleas” Mégevand-Roggo said, adding that on June 14, the ICRC “said publicly that Hamas, by not allowing contact between Mr Shalit and his family, was violating international humanitarian law”.

Notably, however, the ICRC did not say that holding Shalit as a prisoner, or even denying the ICRC the right to visit him are violations of international law, which appears to indicate that the ICRC considers Shalit to be a prisoner of war (POW).

His status would therefore be governed by the Third Geneva Convention Relative to the Treatment of Prisoners of War.

Under Article 125 of this convention, the ICRC’s ability to visit a POW is not unconditional but, “subject to the measures which the detaining powers may consider essential to ensure their security or to meet any other reasonable need ….”

As the ICRC’s Mégevand-Roggo points out, Hamas, the detaining power in this case, “has said publicly that security considerations prevented it from allowing the ICRC to visit Shalit”.

From Hamas’ perspective, the risk of allowing a visit is obvious: revealing the location of the POW would run the risk of an Israeli military attack either to attempt to rescue him, or to harm Hamas’ military structures and personnel.

Both Israel and Hamas would undoubtedly have at the top of their minds, Israel’s 1994 attempt to rescue Nachshon Wachsman, a US-Israeli dual national and member of the Israeli army captured by Hamas fighters in the West Bank.

In that case, Hamas had threatened illegally under international law to kill Wachsman unless Palestinian prisoners were freed.

It had however extended its deadline for Israel to agree to an exchange and, as The New York Times reported at the time, mediators speaking to both sides thought they had struck a deal when Israel decided to launch a military rescue instead.

Wachsman, an Israeli officer, and three Palestinians were killed in the poorly-executed Israeli assault.

Israel claimed that Wachsman had been shot dead by his captors as Israeli soldiers attacked the house where he was held with explosives.

Under the Third Geneva Convention, Hamas is obligated to do all it can to protect a POW’s life, something the organisation seems now to recognise.

Mahmoud Zahar, a senior Hamas official in Gaza, told a visiting South African delegation in April in relation to Shalit: “We have not and will not kill captive Israeli soldiers. Our morals and our religion prevent us from doing that.”

Given its attempts to gain international recognition and respectability, Hamas will almost certainly not deliberately harm Shalit and Israel’s lack of urgency suggests it knows that too.

Hamas, conceivably, could be in violation of its obligations if it revealed Shalit’s location to facilitate an ICRC visit and thus knowingly exposed him to the danger of an armed Israeli attack.

The only situation in which it might be safe for Hamas to consider allowing a visit to Shalit is if Israel gave an unambiguous public undertaking that it would never attempt a military rescue.

Since that is unlikely, and could probably not be trusted anyway, an ICRC visit should not be expected any time soon.

But is it not illegal for Hamas to hold on to Shalit in the first place?

If, as the ICRC seems to consider him, Shalit is a POW, then the answer is no.

Under the Third Geneva Convention, a detaining power is not obligated to release any POW until the “end of hostilities,” unless the POW is severely injured or mortally ill.

Since Israel insists that a “state of hostilities” exists between itself and the Gaza Strip (which it has declared an “enemy entity”), it obviously cannot demand the unconditional release of a captured combatant soldier.

Of course Hamas could release Shalit before the end of hostilities if it wanted to do so, and it has insisted repeatedly that it does in exchange for Palestinian prisoners held by Israel.

But early this year, Binyamin Netanyahu, the Israeli prime minister, reneged (according to some reports under American pressure) on a prisoner exchange deal brokered by German intelligence.

The only point on which Israel appears to have a strong case is the denial of regular contact between Shalit and his family as stipulated in the Third Geneva Convention.

Hamas has provided some information, for example a video last year in which Shalit, appearing physically healthy, spoke to his family.

But Israel is as usual being disingenuous.

Some, belonging to resistance organisations of the kind described in the Third Geneva Convention, may meet the criteria of POWs.

Regardless, they all have rights Israel has routinely violated.

In response to the question “Is Israel entitled to ban family visits to detainees from Gaza held in Israel, given that Hamas is not allowing access to Gilad Shalit?” ICRC representative Mégevand-Roggo affirms: “Both Israel and the Palestinian factions have obligations towards those they detain, and they cannot relieve themselves of these obligations on grounds of lack of reciprocity. This principle is at the very heart of humanitarian law.”

According to Mégevand-Roggo: “An ICRC programme enabling Palestinian families to regularly travel to see close relatives detained in Israeli prisons has been accepted for decades, and the ICRC has always accepted the security controls that were imposed.”

“But the programme has been suspended for families from Gaza” despite regular ICRC calls on Israel to resume them.

Israeli officials have stated publicly that the denial of visits to Palestinian prisoners and other measures against the entire population are intended as a form of pressure, in other words, collective punishment – a grave crime under international law.

Avigdor Lieberman, the Israeli foreign minister, for example, said early in June that Israel should not lift its blockade of the Gaza Strip until Hamas allows an ICRC visit to Shalit.

The tragedy of the Shalit case is not just that Israel is using it to divert attention from the collective punishment of Palestinians, but that Shalit could already have been home long ago if Israel’s leaders had not reneged on the German-brokered deal.

It seems that for the Israeli government Shalit is more useful for his propaganda value as a captive, in stunts like the “True Freedom Flotilla,” than he would be as a free man reunited with his loved ones.

Ali Abunimah is author of One Country, A Bold Proposal to End the Israeli-Palestinian Impasse and co-founder of The Electronic Intifada. 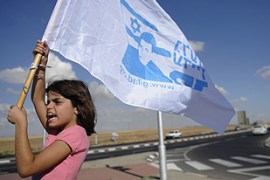 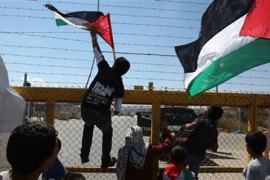 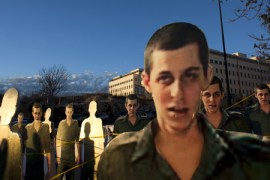 People & Power investigates the case of the captured Israeli soldier. 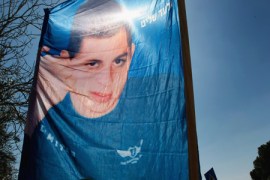 Why a prisoner swap is key to peace

If Barghouti is one of those exchanged for Shalit, ramifications could be far-reaching.