Monday’s bombing of a military bus in Istanbul was the latest flashpoint in an escalating cycle of violence between Kurdish fighters and the Turkish military.

The location was unusual – fighting usually occurs in rural parts of southeastern Turkey – but scores of people have been killed in more than a dozen attacks over the last three months.

It’s a stark reversal from last summer, when Abdullah Ocalan, the jailed leader of the Kurdistan Workers Party (PKK) – the main anti-government group – was talking about a “road map” for peace talks with the Turkish government.

One year later, those political changes have stalled, and the ceasefire has very much ended. Recep Tayyip Erdogan, the Turkish prime minister, vowed earlier this week that Kurdish fighters will “drown in their own blood”, and explicitly ruled out peace talks with Ocalan or the PKK.

And the PKK said earlier this month that it would scrap a year-old ceasefire and resume fighting.

Criticism from the right

Both sides blame the other for the truce’s collapse.

The Turkish military says the PKK has stepped up its attacks this spring, planting remote-controlled bombs and staging ambushes.

PKK leaders say they have been targeted by large-scale military operations [one of which even crossed the border into Kurdish parts of northern Iraq last month]. 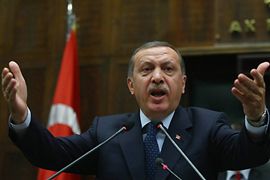 Erdogan’s political overtures suffered a major blow in December, when Turkey’s Constitutional Court outlawed the Democratic Society Party because of its alleged links to the PKK.

The party’s 21 members of parliament resigned after the ruling, which sparked violent clashes in several cities – most notably in Diyarbakir, where more than 5,000 people took to the streets.

Other much-touted initiatives have fizzled out as well.

Thirty-four Kurds, including several former members of the PKK, returned to Turkey last year from years of exile in northern Iraq. The government hailed their return as the first step towards repatriating thousands of Turkish Kurds living in northern Iraq.

But those plans have been put on hold – and all 34 returnees, except for four children, have now been charged with speaking in support of a terrorist organisation.

The attacks have taken on a political dimension for Erdogan, whose ruling Justice and Development Party (AKP) faces difficult elections next year.

Erdogan’s overtures have helped the AKP win some Kurdish support, but they have also exposed the party to criticism from the rightist Nationalist Movement Party (MHP).

Devlet Bahceli, the leader of the MHP, recently called Erdogan’s opening “a project of treason”.

The People’s Republican Party (CHP), the main opposition party, also blamed Erdogan’s policies for the renewed violence, though his criticism was more measured.

“I expressed my concerns over the policies followed [on terrorism] to the President. I explained my concerns over intelligence gathering and economic policies which lead to terrorism,” Kemal Kilicdaroglu, the leader of the CHP, said after a meeting with Abdullah Gul, the Turkish president.

Erdogan has promised not to abandon his overtures to the Kurds. But with violence quickly rising, he will face mounting pressure to crack down – hard – on Kurdish fighters.

Decades of fighting have not ended the conflict – and yet another round seems increasingly unavoidable.