A small group of demonstrators also staged a sit-in outside the provincial government building in the city of Basra.

Many parts of southern Iraq receive just six hours of electricity per day, and tempers have flared as an early-summer heat wave in the Gulf pushes temperatures above 50 degrees Celsius.

Monday’s protests follow a smaller demonstration in Nasiriyah on Sunday, and a large protest in Basra on Saturday, where one person was killed.

Iraqi security forces responded by shooting at the protesters. 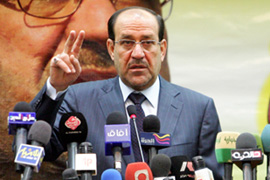 Nouri al-Maliki, the Iraqi prime minister, sent a delegation to Basra to discuss the electricity shortages with local officials.

Tariq al-Hashemi, Iraq’s vice-president, spoke with Waheed on Sunday and asked him to take “serious steps” to improve the electricity situation.

Some of the protesters in Basra on Saturday chanted slogans against al-Maliki. His government has been widely criticised for failing to improve basic services in Iraq.

Power outages are common across the country, and one in four Iraqis still lack access to safe drinking water, according to the International Committee of the Red Cross.

“People are tired of a lack of services, lack of action, and all this debate on television about government formation and positions. The public sense is one of anger and tiredness,” he said.

Jabber Amin, the head of Basra’s provincial council, said on Monday that he would push for greater autonomy from Iraq’s central government.

Amin said an autonomous zone would allow Basra’s government to “improve the services provided to citizens”. Amin said “a majority” of members of Basra’s provincial council support the idea.

The Iraqi constitution allows one or more provinces to form autonomous regions following a referendum. The Kurdistan region – comprising Duhok, Erbil and Sulaymaniyah provinces – is currently the only such region in Iraq.

Local officials in Basra have pushed for autonomy before.The provincial government tried to schedule a referendum in 2009, but could not gather enough signatures on the required petition.

The central government in Baghdad did not immediately respond to Amin’s statement.