Speaking before receiving the report, Martin Ferguson, Australia’s resources minister, said that the findings of the investigation would be important to improving safety and regulation of the drilling industry.

However, less than a year after the Timor Sea spill, the government has opened new areas to offshore exploration.

Last month, Ferguson invited companies to bid for permits to explore new “frontiers” of exploration, with companies such as Royal Dutch Shell and ConocoPhillips are among those planning more than $185bn in local oil and gas projects.

Ferguson ruled out on Thursday suspending offshore drilling, and offered 31 leases in waters as deep as 3750 metres, more than twice the depth of BP’s leaking well in the Gulf of Mexico.

Opposition to the plans has been growing with campaigners urging the government to ensure tighter and more effective regulation of the industry.

Greg Bourne, a former BP senior executive and the current CEO of the World Wildlife Fund (WWF) in Australia, told Al Jazeera that the findings from the Timor Sea will showed Australia was not immune to a spill like the one in the Gulf of Mexico.

“We’ll see failures in regulatory oversight, a sloppiness, a sort of tick-box mentality,” he said.

“And, that must change, particularly if there is a decision to push into deeper water where the risks are much greater and the possibilities of an event like the Gulf of Mexico become increasingly possible.”

Bourne also said the incident in the Motara oil field showed federal and state regulators “were asleep at the wheel,” and that it was a case of “out of sight, out of mind”.

His comments mirror those made by US politicians on Thursday where they told Tony Hayward, BP’s CEO, that his company ignored the risks of drilling in Gulf of Mexico.

There are several striking parallels between the Montara disaster and the massive Gulf of Mexico spill.

Faulty cementing by US-based company Halliburton on the West Atlas rig is believed to have caused the leak, and the same company did the cementing on BP’s sub-contracted Deepwater Horizon rig in the Gulf.

The Montara leak began on August 21 last year after the rig burst into flames, and the flow was not stemmed until early November.

Thai company PTTEP, which operated the rig, reported of high rates mortality among sea birds which swam through the slick.

Despite PTTEP’s role in the disaster, the Australian government approved the company’s acquisition of an offshore oil permit just three months after the 11-week oil leak.

Officials also cleared PTTEP’s acquisition of the Oliver field in the Timor Sea before an investigation into the West Atlas accident had even begun.

Gilly Llewellyn, conservation manager for WWF Australia, has said in a newspaper interview that the disasters in the Gulf and the Timor Sea should hasten the expansion of conservation areas.

“Given what we’ve seen in the Gulf of Mexico and the Montara, it’s time to step back and ask have we got the balance right in areas for marine conservation,” she told The Australian.

Less than 10 per cent of Australia’s maritime zone is classified as marine park, and only a small part of this area is protected. 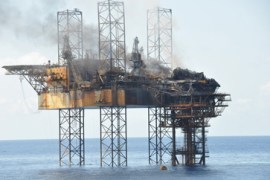